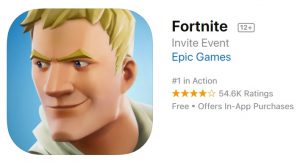 Last week, players of the hit video game Fortnite (and probably their parents) were shocked to learn that the in-game currency they won in the game could be taxable in real life. A previous version of the IRS website discussing virtual currencies specifically stated that Fortnite’s V-bucks is a “convertible” virtual currency and thus could be subject to federal income tax.

The IRS has made no specific ruling on the taxability of those currencies. But it is generally believed that interactions with these currencies while playing the game are not taxable events because obtaining the currencies does not result in a gain of real-world wealth.

Only a few online games have two-way convertible game currencies. Developers are hesitant to create games with these currencies because of the potential for criminal activity and being burdened by government regulations and oversight. The only ones are currently Second Life and Entropia Universe, both of which promote their virtual worlds as a platform to potentially earn real money. But the popularity of both have decreased in recent years.

The IRS quickly deleted the reference to V-bucks on its website when questioned about the taxability of Fortnite’s V-bucks. The site now only lists Bitcoin as an example of a convertible currency.

I (and many others) will consider this to be an unintentional mistake by the IRS that was corrected once they learned about it. But it appears that the Fortnite reference was listed on the IRS website since at least October 9, 2019. That means someone could have filed an erroneous tax return relying on the information provided on the website. Assuming an unlikely scenario where a gamer could be faced with a tax audit for their in-game activities, can they rely on the prior guidance of the IRS to protect themselves from additional taxes, penalties, and interest?

The answer is it’s possible but very complicated. The tax code comes from Congress and, thus, federal tax statutes would control. But the tax statutes do not currently cover virtual currency transactions so the IRS is given the task to interpret how the tax laws should apply to those transactions. And so long as the guidance by the IRS is reasonable and does not conflict with federal law, courts will generally defer to their interpretation of the law.

The IRS issues guidance through several forms. While a detailed description of how the IRS issues guidance is outside the scope of this column, it is worth noting that the most formal and authoritative guidance are final treasury regulations which are binding to all parties, for better or for worse. But instead of going through the regulatory rulemaking route, the IRS issued its guidance in a notice, a cursory (and ultimately mistaken) description, and answers to frequently asked questions on its website.

That is because the IRS is not bound by any statements contained in its information letters although they can be used to forgive penalties. In fact, sometimes the IRS will even ignore its own guidance. Courts have held (surprisingly) that authoritative tax law are the relevant statutes, regulations, and judicial decisions, not the informal publications of the IRS. The U.S. Tax Court has even warned that taxpayers rely on such publications at their peril.

Thankfully, the IRS issued Revenue Ruling 87-138 which stated that taxpayers can rely on notices and announcements that contain substantive or procedural guidance.

What this means is that taxpayers can rely on IRS tax rules and definitions on convertible currencies stated in Notice 2014-21. But it may not rely on any information on its virtual currencies page or the answers to the frequently asked questions as the IRS may one day change the information or may refuse to follow it even if the taxpayer relied on the information in good faith.

The video game industry is experimenting with new ways to monetize. One day, they may come up with a new form of convertible in-game currency. The IRS will have to one day formalize how these currencies should be taxed through the rulemaking process instead of using confusing informal notices. In the meantime, the acquisition of most game currencies like Fortnite’s V-bucks, Street Fighter 5’s Fight Money and Pokémon GO’s gold coins won’t result in a real life taxable transaction.