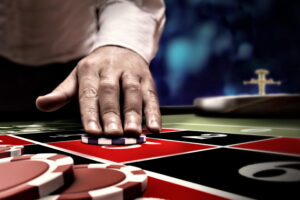 Last month, former Biglaw partner Kym Cushing was suspended from the practice of law by the Supreme Court of Nevada for nine months. The court’s suspension comes after serious concerns about Cushing’s addiction issues and honesty.

According to the court’s opinion, Cushing, who worked at Wilson Elser Moskowitz Edelman & Dicker from 2005 to 2018, wrote three checks to himself from the firm’s operating account. When confronted about the checks, Cushing first told the firm they were to reimburse expert witness outlays, naming a friend (and pro bono client) as the expert. However, Cushing later told the firm the checks were to cover gambling losses. As a result, the firm asked him to resign.

Cushing later rescinded his gambling losses explanation for his behavior, saying in a demand letter to the law firm seeking $5 million in compensation for alleged age and disability discrimination and retaliation that he claimed a gambling problem to save his job. He now claims he actually wrote the checks in a “drunken stupor.” Additionally, he claimed he turned to alcohol to deal with the stress of the “go-to attorney” for difficult cases.

In 2018, Cushing’s behavior was first brought to the Supreme Court of Nevada. Then Cushing agreed to treatment with the Nevada Lawyers Assistance Program to avoid suspension. Unfortunately, Cushing did not follow through with the program and lied about his reasons for doing so.

All of which brings us to the instant case. As reported by Bloomberg Law, the court felt this history was enough to warrant the nine-month suspension:

“Substantial evidence” supports the disciplinary panel’s findings that Cushing’s mental state was “intentional and that his misconduct harmed the public and the legal profession and potentially harmed his pro bono client,” the court said in determining the sanction. It conceded, however, that there were mitigating factors including his emotional problems and lack of prior discipline.

Cushing, who says he is “extremely disappointed” with the decision, can apply for reinstatement, provided he completes the Nevada Lawyers Assistance Program, an anger management program, and an additional 10 hours of CLE credits, five hours of which must be on the subject of substance abuse.