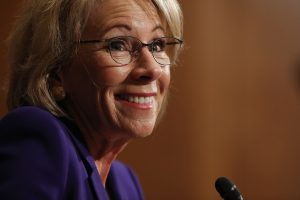 And in spite of the shocking information that the scope of Defendant’s noncompliance was grossly understated, and that they continue to violate the injunction, Defendants do not exhibit contrition.

—Lawyers at Housing and Economic Rights Advocates in Oakland and the Legal Services Center of Harvard Law School asking U.S. District Magistrate Judge Sallie Kim of the Northern District of California to reconsider (and increase) the $100,000 sanction levied against Betsy DeVos’s Education Department. Judge Kim issued the fine in October after it was revealed that DeVos had continued to collect on former students’ loans from the now-defunct for-profit Corinthian Colleges Inc., even seizing their tax refunds and wages, despite a June 2018 order forbidding further collection on loans that should have been forgiven. However, plaintiffs now say the records provided by the government at the time of her October ruling were “grossly inaccurate,” and that the estimation that the 16,000 violations as of the June 2018 order was “off by almost 300%.”