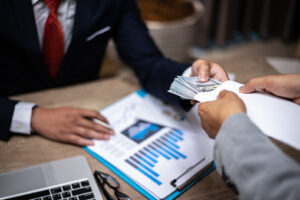 Firm breakups can get ugly, but when New York attorney Frank Eskesen’s former firm started to break up, he says his former partner took it to new heights by straight-up blackmailing him in a bid to secure somewhere between $1 and 1.5 million. Eskesen’s now suing his former partner’s attorneys after they filed a suit in November painting Eskesen as a philanderer who hit on multiple secretaries and had affairs with two others, a complaint that Eskesen claims was filed after he refused to be extorted.

In his own suit, Eskesen claims that Marder first made a $1.5 million demand of him in July, saying “you know, Frank, people both here and at home are telling me, ‘you have all the power, all you have to do is tell his wife.’ But I don’t want to have to do that. I am sure we can come to an agreement.”

There is a fine line between settlement negotiations and extortion. In the past, we’ve taken the stance that demands among sophisticated players should be given the benefit of the doubt and taken as settlement talk. Playing hardball between parties who know that there’s no case to be had isn’t really threatening. But trying to wind up a partnership by allegedly ruining someone else’s marriage falls over the line no matter how sophisticated everyone is. Consider this additional commentary on the Above the Law interpretation of the above rule.

Eskesen’s new suit target’s his former partner’s attorneys rather than the partner himself because, he argues, those attorneys delivered a demand to him and informed him that they would file a suit painting him as the law firm Lothario if he didn’t meet their demands. For their part, the attorneys who accused him of screwing around denied the allegations and branded Eskesen “obviously unbalanced.”