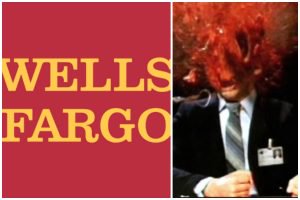 It may be difficult to remember in the ongoing avalanche of incompetence and worse at Wells Fargo over the past four years, but once upon a time the bank was seen as a the very essence of a well-run organization, at least from the perspective of one very not-well-run organization. And given all of the scandals and fines and non-scandal-related disasters and indigestion that emerge on a seemingly weekly basis, it may also be difficult to remember that first giant deposit in the continuing hailstorm of shit, the whole fake account thing. This has taken some time to unwind, possibly in part because not even Wells Fargo is sure how many of its accounts were legitimately opened by a customer and how many were unwittingly opened in that customer’s name to meet some quota. But they’re getting there: Last month, the Office of Comptroller of the Currency put a formal end to former CEO John Stumpf’s already quite over banking career. And now, what’s left of the Justice Department, along with the SEC, is ready to accept all of those billions Wells has been putting aside for this very purpose.

Wells Fargo is preparing to settle with federal prosecutors and the Securities and Exchange Commission over the widespread abuse of customers in its banking, auto lending and mortgage businesses, according to two people familiar with the matter…. The size of the penalties could not immediately be determined, but Wells Fargo has set aside $3.1 billion to pay legal costs related to the sales practice matters.

That’s a lot to be wrapping up at once. But, of course, this is Wells Fargo, and so the story will not end with this novelty-sized check.

While the settlements would resolve yearslong investigations by the agencies, they would not end the bank’s regulatory woes. For two years, the bank has been operating under growth restrictions imposed by the Federal Reserve, which has said it will not release the bank from those constraints until its leaders can demonstrate that they have restructured its operations to prevent similar abuses.