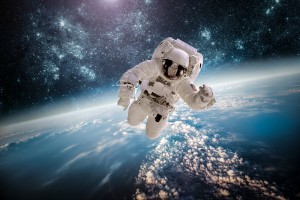 Whether you want to believe it or not, the sheer amount of material resources that passes within humanity’s current reach in space, speaks for itself. These resources include materials already in abundance here on Earth, such as iron. But there also exists an inexhaustible amount of precious metals that are currently classified as “rare” on Earth such as platinum, palladium, and iridium. Moreover, exploiting human labor in order to obtain these materials does not make any economic sense in the harsh environment of space where robots are far cheaper to functionally sustain. In addition to these raw materials, copious amounts of water can also be extracted and utilized for rocket fuel. Which brings me to another inexhaustible resource in space humanity can already extract: energy.

The most obvious, and abundant supply of energy in space is our sun. The International Space Station which has maintained constant human presence in space for decades currently runs on more solar energy than it needs, enough to power 40 homes in fact. When you combine this limitless source of energy with our current ability to extract inexhaustible amounts of raw materials, you can understand how we can already begin to start making powered structures in space that can take the form of massive factories or areas that can maintain huge agricultural capabilities, all powered by an inexhaustible sun.

But in addition to solar energy there also exists fossil fuels in inexhaustible supply within our solar system. As Charles Wohlforth and Amanda Hendrix point out, on Titan, boundless oceans of fossil fuels exist under a protective nitrogen-rich atmosphere. We are probably decades out from sending humans to live on Titan, but sending machines is already within our current capabilities. In other words, right now we possess the technological ability to create hordes of robots that we can send to Titan to extract literally inexhaustible amounts of fossil fuels. All without having to impact fragile Earth ecosystems. Again, this is not science fiction, but our current reality.

Of course, sending hordes of resource harvesting robots to Titan and back would take years to plan and execute. Moreover, obvious realities mean there are many hurdles and problems humanity would have to overcome in order to achieve this level of resource allocation. These institutional, rather than scientific or technological hurdles are what Wohlforth and Hendrix consider to be humanity’s largest barriers to achieving inexhaustible abundance, including “an indifferent political establishment.” To put our institutional indifference to space in perspective, the United States currently spends around $51 billion annually to wage a colossally failed War on Drugs. NASA, meanwhile, gets less than half that level of funding. In other words, our society has chosen to prioritize locking people up in violent cages as a response to ingesting products less harmful to society than legally available alcohol, at twice the level we fund the agency tasked with getting us to space, and a limitless resource reality.

The only reason I still have hair from not ripping it out in a constant fit of rage at the callousness of our current fiscal priorities is because I also know human progress toward becoming a spacefaring species is inevitable. Indeed, market forces are already taking over without me having to convince anyone. In other words, even if I still rage at the current level of human stupidity that stunts the process, I still have a lot of reasons to be confident humanity will get to the abundance of space relatively soon. What’s left to discuss is why it matters that we prioritize this process more than we currently are.

But if a once-in-a-century pandemic, where the threat of human contact is so overwhelming that otherwise singleminded, nonaltruistic corporate entities are voluntarily shutting down rather than risk overwhelming basic human health systems, does not convince a majority of the country to prioritize access to the limitless reality of space, then there are probably no other drastic events that can do so. This means a slower process of gradually winning over hearts and minds through continuous appeal and basic, capitalist greed is all one can expect to get us there. I just hope I have hair left by the time we get around to prioritizing it.