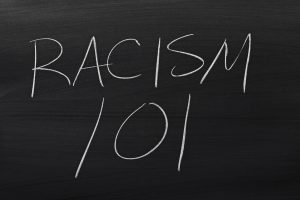 This story is very much about the juxtaposition of grown-ups and children. The good news and bad news for students at the UCLA School of Law is that both are members of the faculty.

To recap, when Professor Stephen Bainbridge went to Twitter to tell the world that he suspects his Chinese students gave him COVID, a contention he based upon… nothing, the folks from APILSA wrote a detailed response garnering, at this writing, over 450 signatures. With a controversy like this brewing on her watch, Dean Jennifer Mnookin sent a statement to students and faculty attempting to strike a tone of tolerance and understanding. Professor Bainbridge has publicly said of his remarks that, “Put bluntly, they were stupid and insensitive,” and Dean Mnookin acknowledged this as an important step in the institution’s ongoing mission:

And that is work that we can and must undertake collectively. To be sure, it is also important to recognize that there is already much we can be proud of about our community and in our learning environment. I see daily the way that compassion and empathy couple with rigorous intellectual engagement. I see students working ardently to learn and to lead while holding on to their deep sense of justice. I see faculty caring about our students as both learners and as individuals. I see students from all over the globe who enrich our collective learning and help to broaden our worldview. And I see a community that is meaningfully diverse along virtually every dimension, and a school where students from backgrounds traditionally underrepresented in the legal profession are succeeding, flourishing and leading, engaged in powerful advocacy both within our school and in the world beyond.

This is what a grown-up does. The response may not resolve everyone’s concerns — apologies are important, but are only the beginning of the hard work of rebuilding trust — but it recognizes that the institution understands the value of getting to that point.

Dean Mnookin’s statement also addressed in passing, as the APILSA letter raised, that the school is only a few weeks removed from a controversy over Professor Eugene Volokh’s commitment to dropping racial epithets in class, despite being asked by students not to. The dean’s mention merely provided context and explicitly acknowledged both Volokh’s right to continue to do this and that students and, indeed, other faculty are right to recognize this as offensive and to push back against it. All in all, it was a very measured, mature statement.

So, with the inevitability of Thanos, Volokh took to his forum with Reason magazine — America’s foremost publication to jerk off to if you’re a 15-year-old white suburban kid with deep thoughts about affirmative action — to pen “UCLA Law Dean Apologizes for My Having Accurately Quoted the Word ‘******’ in Discussing a Case,” except he doesn’t deploy asterisks. Befitting an infantile rant, the subtitle of the work is “I, however, do not apologize.”

Because there is no world beyond him and his grievances.

Volokh rattles off how he’s an equal opportunity quoter of the cornucopia of slurs available in the cases he teaches and then offers his five arguments for never apologizing — let alone stopping — even when it would cost him nothing and would benefit those he lords over in a power relationship greatly. We’ll address each in turn, but the short-version is “because he can.”

First, the law school is part of a university: And by this he means it has “The right (I think the duty, but at least the right) to accurately present and discuss the facts of the world around us.” This is specious. It’s a failure of this duty if he taught these cases claiming that the defendants said “nothing in particular,” thus scrubbing any potential racial animus from the case and leaving it a confusing shell. That would be an abdication of presenting the facts of the world around us. But on the contrary, presenting the case as, “the defendants shouted a racial epithet” or “the defendants used the n-word while walking down a path” provides the class an entirely accurate picture of the facts.

It’s so ridiculously condescending to pretend students would be at a TOTAL LOSS to understand what’s going on in a case if “I, Professor Whitesington, don’t take my shot to gratuitously use the n-word in class even though we all read the case and we all know what happened and saying it again adds nothing to the educational exercise!”

They’re in law school. They can follow the plot just fine.

Another reason is that, once a rule is set forth… people will naturally assume that this reflects a broader principle: One of my favorite law school moments involved a professor pushing us to explore capital punishment by asking, “If heinousness is a justification as you say, would you support expanding the death penalty to particularly violent, serial rapists?” The student responded by offering the sort of slippery slope concerns Volokh does here and the professor, visibly frustrated, responded with, “Well, in this hypothetical, the slippery slope stops at violent serial rapists so now you can go ahead and actually answer my question.”

This is about using of the n-word in class (and, actually, it’s not even that — it was about “using the n-word after being asked not to” which is what made it a deliberate kick in the face than just using it — but Volokh doesn’t seem to see that important distinction in this piece so we’ll meet his arguments on his terms). And while the other terms Volokh worries about getting canceled next probably don’t need to be superfluously bandied about either, let’s assume arguendo that they do. Maybe, someday, cultural norms will shift to make it commonly accepted to insert specific euphemisms for these other slurs. And when that day comes, we’ll do that because when that day comes it means everyone in the educational exchange will fully understand what transpired without repeating the slur again.

Beyond this, a good deal of history and of crime is much more painful than mere racial hostility: Ah, the venerable “sticks and stones” defense. Only in the arrested adolescence of libertarianism can someone make this argument with a straight-face. To address Volokh’s specific example, genocide is the ceiling of unacceptable stuff, not the floor.

In this section, Volokh provides an anecdote about a moot court competition covering the First Amendment and threats where students wanted to remove a case about cross-burning from the field of discussion, despite it being the key precedent involved. And, yes, this would have been a ridiculous outcome because the students couldn’t have properly held the argument without addressing it. But the bigger question is… why did this have to be the topic of the moot court at all? Not to brag, but the body of American constitutional law has given us a whole lot of material to use for challenging students to develop their practical skills.

Moreover, law schools are training people to become lawyers. Lawyers have to deal with facts as they are, regardless of how unpleasant those facts may be: They do and… they do. We also deal with murder in law school and we manage to talk about it without acting it out on a volunteer from class — even if there’s definitely one kid that we’d like to see cold-called on that one. You, Volokh, not getting to satisfy your prurient interest in using taboo words doesn’t mean the students haven’t read the material and understand the subject. In fact, law schools are also about training lawyers to communicate and paint pictures with their personal word choice. The point is, discussing legal concepts doesn’t require literal reenactment, and if students can’t hold a discussion about a case without flinging epithets around then the school has failed.

He then points out that Eleanor Holmes Norton cowrote a brief that uses the word in full, so if you had “but black people get to use that word” on your argument Bingo sheet, congratulations.

Indeed, the implicit message of the claim that black law students, in particular, need to be protected from hearing cases that contain the word… because they find it so painful or offensive or even traumatic, is that young black lawyers will likewise be sharply disturbed by hearing the word in the everyday reality of their practices: Thankfully, Eugene Volokh is here to help young black lawyers learn that the n-word exists. Doubtless they’ve never ever heard that term in their lives up until they walked into his lecture. It is truly important work that he’s doing teaching them that the first 20 or so years of their lives were a cake walk but now they are going to have to deal with racism.

No. The argument is not that “young black lawyers will likewise be sharply disturbed by hearing the word in the everyday reality of their practices,” a straw argument of almost comical dimensions. It’s that they don’t think a law school class needs to be the place for a bunch of people to gleefully use racial epithets. We don’t necessarily use live ammo in every military training exercise either. These attorneys are more than comfortable handling an epithet in the real world, they just don’t understand why the professor has got to bring it in here when they’re more than capable of discussing the legal issues in this academic space without resorting to it.

The whole “jeremiad for the n-word” drips with the passive racism that comes with being so self-absorbed that the experience of others doesn’t matter. To be fair, Volokh certainly doesn’t see any of this running through his words. But the grand conceit of the libertarian worldview, that there is nothing rational but what is intentional — that the only effect of a person’s action is what they intended and any other impact is just someone else’s flawed understanding — is not a neutral endeavor. Sure, Volokh did not set out to write something racist, but the reality of white supremacy is that it’s almost always enforced by people downright oblivious to it.

Building an intellectual cocoon to justify doing whatever one wants whenever one wants, by necessity, relies on ignoring the realities of racial injustice. It’s a glitch in that Matrix that they just can’t see. But it’s there.

And it’s something that grown-ups are able to see.