Donald Trump famously demands loyalty from “his” employees. But as U.S. Attorney Jessie Liu found out yesterday, that loyalty only goes one direction. He will burn your career to the ground the moment you become an inconvenience, and never give it a second thought.

Liu has worn a lot of hats in the Trump Administration. This veteran of Bush’s Justice Department worked on Trump’s transition team and as deputy general counsel at Treasury before being confirmed as U.S. Attorney for D.C. in September of 2017.

As head of the largest U.S. Attorney’s Office, Liu loyally carried out the president’s directives. Like investigating James Comey over an unproven leak allegation from 2017. Or doing her darnedest to get a grand jury to indict former Deputy FBI Director Andrew McCabe. (Cough, cough NO BILL.)

But Liu also inherited some cases from Special Counsel Robert Mueller that were not to the president’s liking. Her failure to go easy on former National Security Advisor Michael Flynn, who pled guilty, or his crony Roger Stone, who was found guilty by a jury, put her in the conservative crosshairs. Barbara Ledeen, a well-connected Republican Senate Judiciary Committee staffer who worked with Michael Flynn to obtain Hillary Clinton’s phantom emails during the 2016 campaign, was particularly outraged by Liu’s failure to drop the Flynn prosecution, according to the Washington Post.

It’s probably not a coincidence that the Judiciary Committee killed Liu’s nomination last year to fill the number three job at the DOJ, ostensibly over her connection to the pro-choice National Association of Women Lawyers. But in December Liu got another shot when Trump announced his intention to nominate her for Under Secretary of Terrorism and Financial Crimes at the Treasury.

Her name was officially advanced to the Judiciary Committee on January 6, and she handed the reins at the U.S. Attorneys Office in D.C. over to her successor Timothy Shea that very day. Which is very much not normal, since nominees don’t typically quit their day jobs until they’ve actually been confirmed to the new position.

There is speculation that Barr needed Liu out of the way so he could “take control of legal matters of personal interest to President Donald Trump,” as NBC described it. The network reports that Barr himself intervened immediately after Liu’s abrupt departure to get the prosecutors in DC to lessen sentencing recommendations for Flynn and Roger Stone. But with her position in limbo and Trump enraged over the Stone prosecution, Liu was uniquely vulnerable.

The Post reports that Trump pulled her nomination yesterday, both because of Ledeen’s imprecations and because he realized that a confirmation battle would mean that Democratic senators got to ask Liu about the Stone case in an open hearing:

Speaking on the condition of anonymity to discuss the situation, the person said Ledeen had made little headway before the recent storm over Stone’s sentencing, calling it a turning point. Treasury officials believe Trump himself made the call to withdraw Liu because her confirmation hearing before the Senate Banking Committee was set for Thursday, and Trump was concerned she would be asked about the case, the person said.

CNN confirms that Trump himself withdrew the nomination because he was pissed off that Liu refused to do more to help out his buddies Flynn and Stone.

For her part, Ledeen denied having anything to do with Liu being unceremoniously kicked to the curb, telling the Post,  “I’m a Senate staffer. I can’t lobby either the Senate or the White House. I’m kind of amazed my name came up in this. Somebody likes to throw around my name.”

Which is simply adorable coming from the person who got caught redhanded sending unsolicited emails to Flynn’s former counsel attempting to coordinate his defense strategy with House Intelligence Chair Devin Nunes’s appearances on Sean Hannity’s show. 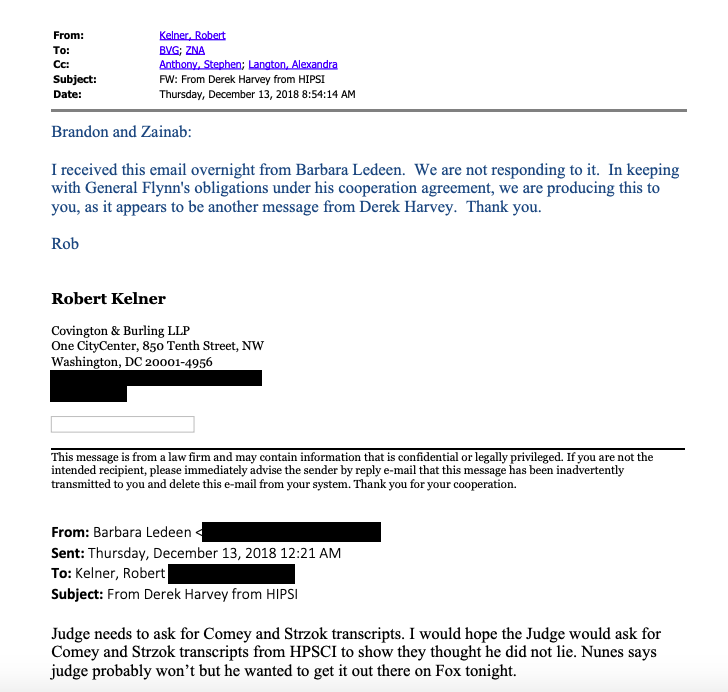 But whoever stuck the knife in, Liu is the one left high and dry here. And while we’re not crying for a lawyer who’ll no doubt wind up on the payroll at Kirkland & Ellis or Jones Day within a week, it’s certainly a cautionary tale for all the line attorneys being asked to toe the party line as Bill Barr decimates the independence of the Justice Department. Sooner or later, that train will jump the tracks and run you over, too!