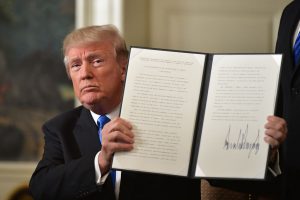 Donald Trump has been very busy protecting America from COVID-19 the past week. What with his corona pressers to hype unproven drug regimens and constant tweeting — 14 and counting as of 1pm today — it’s a wonder he can find time to sleep. Luckily, he’d set an iPhone alert (probably) to remind him to take revenge on civil servants who failed to cover up his plan to extort the president of Ukraine for dirt on Joe Biden last summer. So Friday night, Intelligence Community Inspector General Michael Atkinson got the pink slip.

Atkinson committed the cardinal sin of applying the law evenhandedly to the president’s conduct. Last August, IG Atkinson received the infamous whistleblower complaint alleging that Trump was withholding military aid from Ukraine in an attempt to get that country’s president to announce a criminal investigation of Joe Biden’s son. Atkinson found the allegations credible and forwarded the complaint to then-Director of National Intelligence Joseph Maguire to be transmitted to the House and Senate Intelligence Committees as required by statute. Maguire instead sent it to the White House, where Attorney General Bill Barr and White House Counsel Pat Cipollone contrived to bury it. And then … well, we all know what happened next.

Atkinson was appointed by Trump himself in May of 2018. And yet, Trump insisted at his Saturday coronavirus briefing that Atkinson, who left private practice at Winston & Strawn after the September 11 attacks to serve his country at the Justice Department, lacks the one essential qualification for the ICIG job: He’s not a “big Trump fan.”

I thought he did a terrible job.  Absolutely terrible.  He took a whistleblower report, which turned out to be a fake report — it was fake.  It was totally wrong.  It was about my conversation with the President of Ukraine.  He took a fake report and he brought it to Congress, with an emergency.  Okay?  Not a big Trump fan — that, I can tell you.

After which Trump demonstrated his deep respect for whistleblowers by opining that, “He’s a fake whistleblower. And, frankly, somebody ought to sue his ass off.”

Atkinson himself released a statement yesterday saying, “It is hard not to think that the President’s loss of confidence in me derives from my having faithfully discharged my legal obligations as an independent and impartial Inspector General, and from my commitment to continue to do so.”

He continued with a dire warning against politicizing the position of Inspector General and a plea to protect whistleblowers, ending with “a message for any government employee or contractor who believes they have learned of or observed unethical, wasteful, or illegal behavior in the federal government.”

The American people deserve an honest and effective government. They are counting on you to use authorized channels to bravely speak up – there is no disgrace in doing so. It is important to remember, as others have said, that the need for secrecy in the United States Intelligence Community is not a grant of power, but a grant of trust. Our government benefits when individuals are encouraged to report suspected fraud, waste, and abuse. I have faith that my colleagues in Inspectors General Offices throughout the federal government will continue to operate effective and independent whistleblower programs, and that they will continue to do everything in their power to protect the rights of whistleblowers. Please do not allow recent events to silence your voices.

On Sunday, Donald Trump forwarded the names of five additional Inspector General candidates to the Senate for confirmation. Presumably these nominees have passed the “big Trump fan” test and will be more to the president’s liking.

Remarks by President Trump, Vice President Pence, and Members of the Coronavirus Task Force in Press Briefing [WH Transcript, April 4, 2020]
Statement of Michael K. Atkinson, Inspector General of the Intelligence Community, on His Removal from Office [via NYT, April 5, 2020]