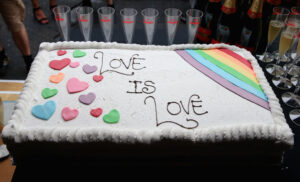 Easily, the most significant civil rights victory of the decade is the advancement of LGBTQ rights. The struggle continues always, but it’s likely that our children or grandchildren will not remember a time when gay people couldn’t get married.

If Republicans were smart, they would accept the righteousness and morality of the LGBTQ cause, and pivot towards embracing gay equality. Significant numbers of white gay men would likely come back to the Republican party, if the GOP just let them enjoying the trappings and privileges of being white men.

But, because they are Republicans, bigotry and intolerance always gets in the way. Gay marriage might have achieved what appears to be a solid legal victory, but there are other fights for equality and fair treatment under the law. A new report from Lambda Legal illustrates the efforts of President Donald Trump, Senate Majority Leader Mitch McConnell, and, in all likelihood Vice President Mike Pence have made towards making the federal judiciary into the board of directors of Chick-Fil-A. From NBC News:

A third of the more than 50 circuit court judges nominated by President Donald Trump since he took office nearly three years ago have a “demonstrated history of anti-LGBTQ bias,” according to a new report by LGBTQ civil rights group Lambda Legal, which asserts that the justice system is “now indisputably in a state of crisis.”…

“This is a fast-moving train wreck that — unless something is done now — could undermine civil rights protections for the next 40 years.” Sasha Buchert, a senior attorney at Lambda Legal, said of the pace at which Trump is filling the courts. “An entire generation of LGBTQ people seeking their day in court could be facing judges who have made no secret about their hostility to the rights of LGBT people, women and immigrants.”

The play here is obvious. Anti-LGBTQ laws are now, finally, generally unpopular. I mean, there are always going to be pockets of homophobia and they’re always going to be bi-curious politicians overcompensating with draconian legislative proposals. But, in broad strokes, singling out gay people for humiliation as a matter of law is frowned upon in this experimental establishment. The homophobes are an aging, insular minority and the arc of history seems to finally be bending away from them.

Unfortunately, that aging insular minority has taken control of the federal courts. And from there, they can institute nearly-dead hand control over the laws for a generation. We’re likely to see, this June, the Supreme Court re-interpret the Civil Rights Act to exclude gay people. Throughout the Circuit Courts, these Trump judges will not so much deny the right of LGBTQ people to exist (so long as that existence comports with their gender at birth), but deny the right of LGBTQ people to sue to protect themselves from bigotry and inequality in any meaningful way.

And from their lifetime perches on the courts, these bigots can frustrate LGBTQ rights, without any check or retribution from the emerging popular will.

Trump and McConnell’s victory is not yet complete. Any of the Democrats running for President can put a stop to this robed bigotry. Any of them.