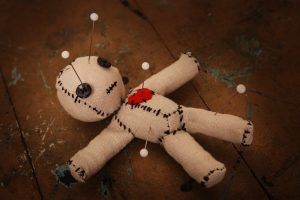 “And she’s, I guess, from what I hear, a very strong woman, a very dominant person, so she can get people to do whatever she wants. And she got on, and then she became the foreperson, forewoman, on the jury.”

This is how the president referred to Tomeka Hart, the foreperson of the DC jury which unanimously convicted Roger Stone on seven counts of obstruction, false statements, and witness tampering. She dominated those poor, hapless other jurors and forced them to convict Roger Stone. Obviously.

Trump on Roger Stone: “The forewoman of the jury, the woman who was in charge, is totally tainted when you take a look. How can you have a person like this? She was an anti-Trump activist”

Goes on to claim she’s a “dominant person, so she can get people to do whatever she wants” pic.twitter.com/TqZY0wHIi0

“And I assume they asked her a question: ‘Do you have any bias?  Do you have any…’  She didn’t say that. So is that a defrauding of the court? You tell me,” Trump continued.

Indeed one would assume that Stone’s counsel worked diligently to weed out jurors with potential bias and demanded that they be struck for cause, particularly since Judge Amy Berman Jackson allowed dozens of jurors to be dismissed at the defense’s request. And yet, as David French pointed out last week, Stone’s lawyer Robert Buschel knew perfectly well that Ms. Hart was a politically active Democrat, and he didn’t care.

Here’s the sum total of their interaction during voir dire.

MR. BUSCHEL: Did you ever work for anyone in Congress?

PROSPECTIVE JUROR: I ran for Congress.

MR. BUSCHEL: You ran for Congress?

PROSPECTIVE JUROR: I worked on my own campaign.

MR. BUSCHEL: And you have friends who worked for other congressmen?

MR. BUSCHEL: Do you have any political aspirations now?

PROSPECTIVE JUROR: My home state in Tennessee. No local.

MR. BUSCHEL: Just recognize that there might be some media— What are your aspirations?

MR. BUSCHEL: The fact that you run for an office, you’re affiliated with a political party. Roger Stone is affiliated with the Republican party, Donald Trump. You understand what I’m saying and getting at?

PROSPECTIVE JUROR: I do.

MR. BUSCHEL: How do you feel about that?

THE COURT: Can you make that question a little bit more crisp? Is there anything about his affiliation with the Trump campaign and the Republican party in general that gives you any reason to pause or hesitate or think that you couldn’t fairly evaluate the evidence against him?

THE COURT: All right, you can step out.

THE COURT: All right, you can step out.

THE COURT: Mr. Buschel, you have a motion?

THE COURT: Okay, let’s bring in the next juror.

So, unless Hart lied on her jury questionnaire Roger Stone’s lawyers already had their shot. Not that fine distinctions like that will stop Donald Trump, noted Law Stuff ‘n’ Jury expert, from accusing her of using those scary brown-lady wiles to force the jury to convict Roger Stone.

But Trump wasn’t done. After insisting that “Stone was never involved in the Trump campaign for President,” which is hilarious since he very publicly fired him in August of 2015, the president went on to opine that his old buddy couldn’t possibly be guilty of witness tampering, because HELLO, NO GUN!

They talk about witness tampering.  But the man that he was tampering didn’t seem to have much of a problem with it.  (Inaudible) think they know each other for years.  And it’s not like the tampering that I see on television when you watch a movie.  That’s called tampering — with guns to people’s heads and lots of other things.

Donald Trump has seen the movies, man. He knows from witness tampering.

Although there is an argument that texting “Prepare to die, cocksucker” to a potential witness is ever so slightly tamper-y. Ditto for threats to take away that witness’s dog. And indeed that witness, whose name is Randy Credico, testified that he was extremely intimidated by Stone’s repeated threats against Credico’s friend Margaret Kunstler if Credico testified truthfully to Congress.

“You are so full of shit. You got nothing. Keep running your mouth and I’ll file a bar complaint against your friend Margaret,” read one message. But there was no gun emoji, so obviously, this doesn’t rise to the level of witness tampering, right?

Anyway, don’t worry that the president is about to pervert the course of justice by pardoning his old friend who lied to congress to obscure the Trump campaign’s contacts with Wikileaks about dumping emails stolen from the DNC by Russian hackers. Well, don’t worry yet.

But I’m not going to do anything in terms of the great powers bestowed upon a President of the United States.  I want the process to play out.  I think that’s the best thing to do, because I’d love to see Roger exonerated, and I’d love to see it happen because I personally think he was treated very unfairly.

He’s not saying that he’s going to pardon Roger Stone right away. But if the legal system fails to produce the result that accords with Tucker Carlson’s informative lectures on Law! How Does That Even Work, Bro?, well, all bets are off.

In other words, Roger Stone will be ringing in the New Year at Mar-a-Lago with Rod Blagojevich and Eddie Gallagher and the entire Trump clan. And you can take that one to the bank.

Is there a Stone Jury Scandal? Not So Fast … [The French Press]
Remarks by President Trump at a Commencement Address at Hope for Prisoners Graduation Ceremony | Las Vegas, NV [WH Press Office]