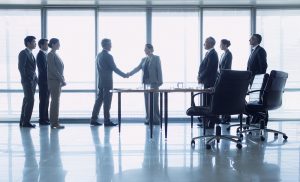 The merger, which we’ve been tracking for awhile, is actually one of the rare Biglaw mergers that makes a lot of sense. The two firms don’t overlap all that much with only 3 redundant offices to be sorted out and while Troutman was roughly 40 slots ahead of Pepper Hamilton in Am Law’s ratings, the firm’s RPL numbers were in the same ballpark, greasing the wheels for the merger.

When we last discussed the mechanics of a dying law firm, we talked a lot about how overaggressive mergers often kick off the countdown to a firm’s demise. Looking into the next decade, mergers are going to continue to ramp up and the demarcation between the firms that make it and the firms that don’t — putting aside the elite Am Law 25 or so — is likely to be whose mergers make the most sense. Troutman and Pepper think they’ve hit the sweet spot.

Earlier: Pepper Hamilton And Troutman Sanders Planning To Merge
In Memoriam… To All The Law Firms We Lost Last Decade