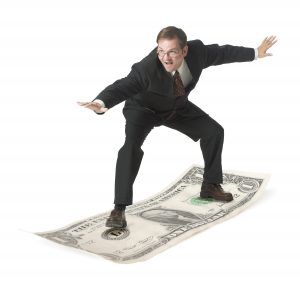 If you’re lucky enough to have a $100 bill in your wallet, take it out and look at all those beautiful anticounterfeiting security features designed to keep your money safe. It’s got that trippy blue security ribbon with textured images of bells and 100s, an image of a bell in an inkwell that changes color in the light, and of course the watermark that is now iconic to U.S. currency. Ben Franklin’s subtle half-smirk is well placed, almost like he knows a little something you don’t.

Now take a peek at a twenty. Whereas the $100 bill is the most counterfeited U.S. denomination overseas, here at home, the $20 bill is more frequently counterfeited than its companion notes. Still an impressive feat of printing and design, the $20 bill has all the security features that have become more or less ubiquitous on U.S. currency, including the twist of a shifting color palette which fades from green to peach and back again. It doesn’t feature a picture of Harriet Tubman thanks to Steve Mnuchin, but hey, still a pretty good-looking banknote from a design perspective.

Finally, pull out a one. Soggy, torn, green ink smeared across it in tones that seem to differ wildly from one bill to the next, it looks like something you blew your nose into. Would anyone bother to make a fake version of something that looks so despondent in the first place?

Yes, it turns out they would. International Falls, Minnesota, perhaps best known for its unofficial motto, “Oh God it’s so cold I can’t feel my face,” and as the birthplace of my redheaded friend Andy, now has a new claim to fame: the end of the line for an international counterfeit currency smuggling operation.

Last week, U.S. Customs and Border Protection seized 45 cartons of counterfeit U.S. currency with a face value of $900,000 — in fake one-dollar bills — at the U.S.-Canada border at the International Falls Port of Entry. If you’re wondering what a shipment of nearly a million bucks in fake ones looks like, well, it looks like a bunch of cardboard boxes stacked up on pallets that stand well-above waist level. That is a lot of singles.

The bogus money was found in a commercial rail shipment, which authorities say originated in China. It really makes one wonder what the plan was going to be if and when the shipment reached its destination. How do you launder almost a million bucks in fake singles? Do you just pass them out as tips to baristas for the next 57 years? Maybe you bring a small army of complicit hotdog vendors into the fold? I’m pretty sure you’re not going to just get a hand truck and wheel 45 boxes stuffed with ones into a bank. And why 45 boxes, anyway? If you do the math, that’s 20,000 singles per box. Did someone get sticky fingers between here and China and run off with the other five boxes? Or did the printer decided he or she could get away with shipping $900,000 in pretend $1 banknotes, but trying to ship an even million was just too risky?

Perhaps you’re wondering, like I was, whether this crime could even be worth the printing costs. Well, if the presumably Chinese counterfeiters behind this daring low-rent forgery ring are at least as efficient as the U.S. government, it could indeed be worth their time. It only costs the government 5.5 cents to print each one-dollar greenback. This is about half of what it costs the Department of the Treasury to print the larger bills up to the $100 denomination, and about a third of what it costs to print a $100 bill, because $1 bills haven’t been redesigned in decades and lack the slightly more expensive security features of the larger bills.

Apparently the fourth season of the hit series “Fargo” is already set to air in 2020, but if the showrunners need some ideas for season number five, they need look no further. Midwestern crime stories don’t get much more absurd and charmingly quirky than $900,000 in counterfeit one-dollar bills in a train car in International Falls.