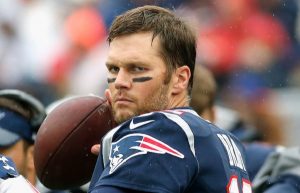 You knew Tom Brady’s surprise NFL return would inspire speculation about the year’s other most consequential retirement. And while Tom Brady has decided retirement isn’t as much fun as being piledriven into the turf by Aaron Donald, mercifully Stephen Breyer doesn’t feel the same about the juridical equivalent of facing Donald: perpetual banishment to the bottom of 6-3 opinions.

But that didn’t stop someone from crafting a solid photoshop:

The concept of Breyer writing LFG is so much funnier than the rest of the tweet. Though Breyer would probably find a way to explain it away as a Latin phrase meaning “Law, Faith, and Grace” or something.

So, no, you’re not going to see Breyer suiting up for another season next Term, because unlike Tampa Bay, the Supreme Court actually has a perfectly good answer at that position.

Whether or not he’ll build a second career selling iffy vitamin supplements to deliver “PEAK JUDICIAL PERFORMANCE” under the “SB94” label remains unclear.