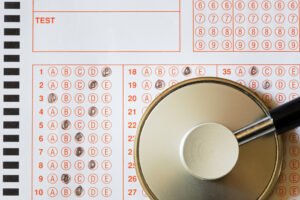 We are sufficiently familiar with the COVID-19 outbreak that cancellations are the new normal. So when the Law School Admission Council, the group that administers the LSAT, announced earlier this week that they were canceling the March administration of the law school entrance exam worldwide, well, it wasn’t much of a shock.

“They not only expected it, it was met with great relief,” Testy said, noting that the council has received many emails and online comments saying it did the right thing.

And procrastinators around the world rejoiced.

Those who were registered for the March 30th exam will be automatically registered for the next administration in their area. For those in the United States, Canada, Puerto Rico, and the U.S. Virgin Islands that means the April 25th LSAT, while folks in other locations will have to wait until June.

The good news is that of the ~9,000 people signed up for the March test, only 470 were planning on using the score in fall 2020 admissions. At least as far as law school admissions goes, coronavirus appears to have excellent timing.

“Thankfully, we’re pretty far along in the [current] admission cycle,” Testy said. “Most schools already had deadlines, or have them in early April. Most students are already tested and are maybe finishing up applications. There’s not many who are really in need of that score in order to apply.”

As of now, only the March administration has been canceled, but the LSAC is working on contingencies in case the April test also needs to be dropped too. Testy said they’re considering adding a May administration of the LSAT as well as a remote administration of the entrance exam. That a remote LSAT is even in discussion is only because the exam moved over to to a digital format last year — a move that’s gone over pretty well — and it has given the LSAC the experience to think outside the box during the pandemic:

Testy noted that the writing portion of the LSAT is currently administered remotely. “You’re sitting in your home, and there is a software system that allows you to take the test from your own computer. The idea is that you can take it remotely, and it would be secure.”

Hopefully this makes applying to law school during a global health crisis a little easier.