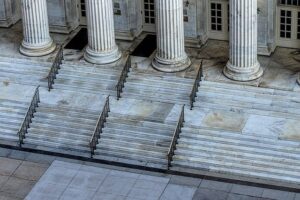 Last week, evangelical culture in the U.S. was rocked after Mark Galli, the outgoing editor-in-chief of Christianity Today, the most popular evangelical magazine, issued an editorial calling for the removal of the current president from office. In explaining why he was issuing the editorial, Galli stated it was important before making his criticism to understand why the vast majority of Christians will nevertheless continue to support this president. One of the reasons cited by Galli for the continued Christian support, was the president “has done a great deal for religious freedom.” The reason why Christians need a great deal done for them when it comes to religious liberty is again, according to Galli, because there are sectors in “the United States” where Christians “are increasingly being disenfranchised.”

The claim that Christianity or individual Christians are under some sort of legal threat is often repeated by the president himself. In the current president’s view, he is the only thing standing in the way of government somehow taking Christianity away from all of his supporters. Nationally respected magazines have spread the same doomsday warnings about apocalyptic inquisitions that are just around the corner. Conveniently, the culprits or would-be perpetrators responsible just so happen to be the same group the administration literally blames for increasing every “social pathology”: nonbelievers, or those who reject Christianity and Judaism in particular.

Of course, it would be inaccurate to say Christians in the U.S. have never faced bigotry, even recently. On college campuses for example, Christian groups that condemn gay marriage as an abomination and abortion at any stage as equivalent to murder, face significant social backlash. But it is also important to acknowledge that the legal system has rightfully, and thankfully, prevented that backlash from becoming permanently institutionalized. Moreover, it appears the urge to use state power to silence disfavored speech on college campuses is a universal problem that includes the Christian right. The more significant point, however, is that if the legal threats faced by Christians are compared to what nonbelievers currently face, the argument that Christians are the ones who are under threat is turned on its head.

For instance, to my knowledge no state is currently trying to shut out all Christians by making nonbelief a perquisite for any official state act. Yet, just this year a federal court upheld a state’s disenfranchisement of nonbelievers from giving secular invocations. The court’s theory behind barring nonbelievers was “only theistic prayer can satisfy all the traditional purposes of legislative prayer.” This is not a neutral government position but a direct message of exclusion by a federal court to an ever-growing population of nonbelieving Americans.

In another federal court in Texas, a ban on “secular celebrants” from performing marriage ceremonies was recently upheld. Unless it can be shown that secular celebrants somehow harm religious celebrants or religious weddings, it is impossible to identify any state interest for banning secular celebrants from performing weddings for nonbelievers other than outright religious bigotry.  Yet, the federal court in Texas found no constitutional issue with a law that bans nearly a fifth of the Texas population from performing weddings based primarily on whether they subscribe to organized religion or not. There is simply no Christian disenfranchisement equivalent to the type upheld against nonbelievers in just these two cases alone, and I could go on.

In order to appreciate the degree to which nonbelievers are regularly demonized by government officials let’s engage in the experiment I suggested here. Simply replace the word “secularists” with “Christians” or “Protestants” from a speech recently given by the Attorney General of the United States and I suspect many evangelicals would be outraged. For example, what if a nonbelieving Attorney General said:

“On the other hand, we see the growing ascendancy of [Protestants] and the doctrine of [Christianity]. By any honest assessment, the consequences of this moral upheaval have been grim. Virtually every measure of social pathology continues to gain ground.”

“I will not dwell on all the bitter results of the new [Christian] age. Suffice it to say that the campaign to destroy the traditional moral order has brought immense suffering, wreckage, and misery. And yet, the forces of [Christianity] ignoring these tragic results, press on with greater militancy.”

Is there any doubt evangelicals would react to such statements by an Attorney General with horror and outrage? So why is it okay if the statements are directed at nonbelievers? The likely reason that many evangelicals refuse to acknowledge or take a stand against bigotry toward nonbelievers is they have a distorted, often repeated, inaccurate view that Christians are being “disenfranchised” or legally attacked by secularists.

Those advocating for secular celebrants in Texas are not trying to prevent Christian celebrants from being something that exists. Rather, they are simply asking that those couples who desire to have someone who shares their beliefs and values to be able to perform their marriage. As the Center for Inquiry’s vice president and counsel Nick Little puts it: “All we want is for our celebrants to be allowed to serve our community, without lying and pretending to follow a religion they do not believe in.” The fact one of our most populous states would deny nonbelievers the ability to perform this service, that attorneys would fight to maintain this denial, and that a federal judge would uphold it, should be enough to settle the debate about who is really under legal threat.”