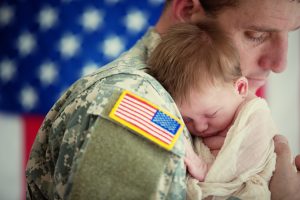 We’ve talked about military spouses and the struggles of maintaining a legal career when moving states (or countries) every few years. While we’ve highlighted some of the innovative solutions out there for spouse attorneys — like robust, tech-assisted freelancing — the simplest solution would be for states to just lighten up on the licensing bureaucracy to help those stationed domestically port their careers.

The latest National Defense Authorization Act includes a provision calling on the Department of Defense to take steps to convince the states to harmonize a bit for the good of military spouses.

The NDAA provision calls for the DoD to enter an agreement with the nonprofit Council on State Governments to come up with a series of proposed interstate compacts to ease licensing restrictions. The goal is to “alleviate the burden associated with relicensing in such an occupation by a spouse of a member of the armed forces in connection with a permanent change of duty station,” according to the legislation.

That unfortunately feels like throwing another committee at the problem, but what are you going do? The government’s throwing up to $4 million toward the project.

New Law Will Make It Easier for Military Spouses to Keep Licenses During a PCS [Military.com]