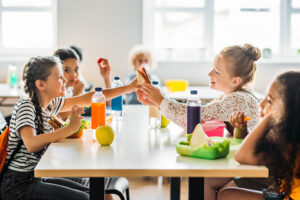 What does feeding hungry kids have to do with the GOP’s current obsession with bashing LGBTQ+ Americans? Nothing! And yet Kansas Senator Roger Marshall is still threatening to blow up a bipartisan deal to fund school lunches because it doesn’t let him beat on trans kids enough.

As reported by Politico, current funding for school-based nutrition programs, which kids rely on during the summer, too, will run out on June 30. Senate Republicans have not whipped against a deal to extend funding for another year, but any one senator can block expedited voting. So Marshall is threatening to do just that because of language in a May 5 USDA Memorandum which says that “State Agencies and program operators will have to update their program discrimination complaint processing procedures for allegations related to services and activities receiving federal financial assistance from the USDA to ensure discrimination complaints alleging sexual orientation and gender identity discrimination are processed as complaints of prohibited sex discrimination.”

Marshall believes — or at least purports to believe — that this means the federal government is going to deny lunch money to schools that bar trans kids from using the appropriate restroom. And he’s not having it!

“I’m just afraid that schools in Kansas won’t have school lunches because of this administration’s radical view on transgender issues,” Marshall told Politico. “And I’m afraid that they’re going to raid the school lunch program over that issue.”

Here on Planet Earth, the language only pertains to federally subsidized nutrition programs. So if, say, the lunch lady refused to give your kid food because they’re trans, that would be barred under the USDA Memo. And the Biden administration has given exactly zero indication that it intends to “raid the school lunch program” over this or any other issue.

But that hasn’t stopped those goobers at the Heritage Foundation from fanning the flames:

But now, a school’s failure to adhere to “gender identity” anti-discrimination policies and open restrooms, locker rooms, or sports teams to those professing to be the opposite sex will put their federal nutrition assistance funding at risk.

That means that needy kids—no matter their sexual orientation or gender identity—might have to go without meals at school.

So Marshall, a man so doggedly ignorant that he managed to provoke Dr. Anthony Fauci to exclaim “What a moron!” on a hot mike, is wondering if the best way to protect kids is to cut off their access to food on July 1. It’s either that, or agree that the cafeteria lady can’t look down your kids’ pants before ladling out their Sloppy Joes.

And we can’t have that, can we!

Liz Dye lives in Baltimore where she writes about law and politics.