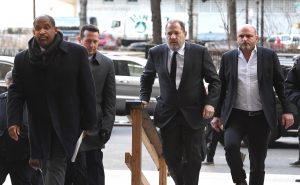 (Photo by TIMOTHY A. CLARY/AFP/Getty Images)

The guy everybody loves to hate, Harvey Weinstein, was convicted yesterday after a long, knock-down, drag-out trial. Nobody’s shedding a tear. I compliment the hard work of both sides and the nerve of prosecutors to bring the most extreme charges they could, but also the defense attorneys for defending a man so universally reviled.

This is a sea change. As Manhattan District Attorney Cyrus Vance put it in his press conference immediately following the verdict, “this verdict pulled our justice system into the 21st century.”  He went on to explain. “Rape is rape, no matter what. Whether it’s a stranger in a dark alley, or an intimate partner in a working relationship. Whether it’s committed by an indigent person or a man of immense power, prestige, and privilege. Whether the survivor reports within an hour, within a year, or perhaps never.”

Strong words, fitting for the fight of all sexual assault victims. But let’s not rush to change laws, already strict, or assume the victim is always right and the person accused always guilty.

This was a unique case. Weinstein became the poster boy for the evils of the “casting couch” — powerful men expecting sexual favors from hopeful actresses. It was so common, it became cliché.

But times evolved, and the #MeToo movement was born, along with the realization that the old ways, the winks and nods of men expecting sex in return for favors, were no longer acceptable.

Weinstein was stuck in a time warp. Like the guy who still calls his female colleagues “honey” or expects his “assistant” to dress sexily and bring him coffee, Weinstein never evolved. Decades passed, and he never learned or repented. Even yesterday, as the jury verdict was being read, he reportedly muttered, “But I didn’t rape anyone.”

There have been cries to further extend the statute of limitations on sex crimes beyond what it is — already longer than the five-year limit for most crimes. But the limits are in place for a reason. It’s difficult enough for any accused to confront the power of a state or federal prosecution, but when that prosecution occurs decades after the alleged crime, the accused is hard-pressed to present any defense at all.

The prosecutors won their gambit. The Weinstein conviction proved that sexual assault complainants can be believed no matter the time delay, quid pro quos in the relationship, or lack of corroboration.

Hopefully, this verdict will encourage sex-assault victims to come forward sooner, rather than later. The sooner their complaint is presented, the easier to prosecute and the more likely the predator will be stopped.

Weinstein may have gotten what he’s long deserved — he’s been stopped, humiliated, and no doubt will be severely punished.

Part of me is gleeful for his fall and the lesson he symbolizes. But part of me is wary. Many men are accused of sexual offenses they did not commit. Their cases have just become that much harder to defend.