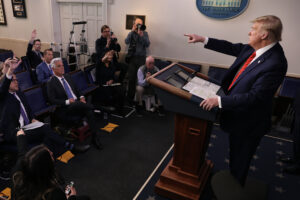 A keen-eyed Washington Post photographer at Thursday’s Coronavirus Task Force briefing revealed that not only did President Donald Trump once again refer to SARS-CoV-2 as “the Chinese virus,” but even Sharpie’d in a reminder to do so in the notes for his opening remarks.

When ABC News reporter Cecilia Vega asked at Wednesday’s briefing why he insists on using the term when people of Asian descent are falling victim to hate crimes amid panic over the Covid-19 pandemic, he said it wasn’t racist and was “accurate” because the virus originated in China. One has to wonder, does he intend such language as a diplomatic swipe at China, a xenophobic dog whistle to rally his base or a deflection from his administration’s botched response to the crisis? My guess would be the answer to that is “yes.”

But whatever the explanation, it fits patterns of behavior Trump has displayed amid the pandemic that mirror those of the Chinese leaders at whom he points his finger. In both countries, opportunities to control the contagion were squandered, people suffered severe illness and death, economies were crippled and nations brought to their knees thanks to leaders more interested in protecting their images and power than in safeguarding the public’s health and welfare. SARS-CoV-2 isn’t Chinese or, as some Chinese Communist Party figures have tried to suggest, American. It’s an authoritarian virus, and it has infected our respective countries as much as it has human beings.

When I say “authoritarian,” I don’t necessarily mean “dictator.” China is a one-party dictatorship, and the U.S. is a multi-party democratic republic. What Trump and Chinese President Xi Jinping have in common isn’t how much power they have, but their political worldviews and instincts. That’s important to note because although SARS-CoV-2 came from Mother Nature, authoritarian instinct fathered the self-interested inaction by leaders in China and later by Trump that has enabled its spread.

Trump’s social and news media bootlickers have defended the term “Chinese virus,” gaslighting people who have called it racist. OAN journalism cosplayer Chanel Rion was widely panned after she asked at the Thursday briefing if “Chinese food” was similarly racist and more or less accused the mainstream press of being foreign agents, her pseudo-question provoking Trump into an anti-media tirade. Rion’s idiotic, Jeff Gannon-style fawning is a prime example of the authoritarian dynamic at play. Rather than using her highly privileged position as a White House correspondent to hold leaders accountable, she used it as an opportunity to flatter them, acting as the very kind of propagandist she accused mainstream journalists of being.

To be sure, it’s undeniable that the CCP and the culture of censorship and top-down leadership it has fostered deserve a significant degree of the blame for the pandemic. As detailed in a Wednesday report by Axios, the response by authorities in China to early reports of the virus was to cover them up, reprimand doctors who posted information about it online and order labs to stop testing and destroy samples. They waited a whole week to publish the virus’ genome. Despite their more forceful response as of late and reports that China has seen no new domestic infections, a preprint study by the U.K.’s University of Southampton found that had they acted earlier, the number of cases could have been reduced by as much as 95%. And this was hardly an isolated incident: The Chinese government similarly tried to cover up the 2002-2003 SARS outbreak – which happened while I was living in China – persecuted HIV/AIDS activists and only admitted the existence of “cancer villages” in 2013. And it has lately mounted a propaganda offensive to obfuscate its culpability for the Covid-19 pandemic.

But it would be a mistake to think that Trump and his fans’ calling SARS-CoV-2 “the Chinese virus” is any kind of good-faith effort to hold the CCP accountable. If it was, they would be fair-minded enough to recognize our own elected president behaving in the very same way as a dictator waking up to the reality that he can’t censor away a global health crisis. Indeed, finger pointing by either side is little more than “Spy vs. Spy.”

Recall that when he wasn’t dismissing criticism of his administration’s handling of the outbreak as a “hoax,” Trump blamed the Obama administration for the ill-equipped Centers for Disease Control and Prevention and tried to prevent a cruise ship with infected passengers from docking to keep the number of infected in the U.S. artificially low. As he greatly exaggerated the country’s capacity to test people for the disease, the CDC quietly removed the number of people tested from its website, as it became clear we were – and still are – woefully unprepared. He ordered that high-level meetings about the pandemic be classified and that any public communication by officials working on it be cleared by Vice President Mike Pence.

None of these are the actions of a democratically inclined leader dedicated to transparency. They’re the kinds of things you would expect from an authoritarian dedicated to concealing facts that he finds personally inconvenient. So it’s no wonder that, like his counterparts in China, Trump has congratulated himself while failing to acknowledge, let alone meaningfully address, the systemic political problems that led to his inaction. It would simply not be in his short-term interest to do so, any more than would be for the CCP.

Like China’s leaders, Trump’s top priority was making himself look good and saving his own skin, particularly in an election year. As a result, like China, we wasted precious and irreplaceable time to forestall a catastrophic public health crisis in which every day counts. Now, while we hope we can come out like South Korea, which is emerging from its crisis thanks to widespread testing, we’re staring down the barrel of horrors like those experienced in Italy, where doctors are forced to choose who lives and who dies because they don’t have the resources to treat everyone.

Trump’s tone at the press briefings has noticeably changed to somber and serious, but his behavioral impulses have not. At what are supposed to be events to share crucial information and unite the country, he has heaped praise on himself, complained about the news media and taken shots at political opponents. And he has described a virus using a term that, intentionally or not, invokes the longstanding American tradition of casting ethnic minorities – especially non-white ones – as diseased and forever foreign.

The ease by which Trump reverts to his usual media-bashing and self-aggrandizing even in such a dire situation suggests that the only lesson he has learned is that if Covid-19 runs amok in the U.S., many will die as the healthcare system collapses, and the economy will get really, really bad – but above all, that will hurt his chances for re-election.

China’s leaders don’t have to worry about re-election, but they do have to worry about being dismissed, passed over for promotions or prosecuted, and they’re deeply paranoid about social unrest and the power of rumors, amid heavy press censorship, to spark it. In other words, their mindset is not unlike that of the Soviet officials in Pripyat, Ukraine, whose lies and desperation to curry favor with higher-ups enabled the Chernobyl nuclear disaster, while the USSR government tried to conceal it. As The New York Times’ Nicholas Kristof pointed out, there’s a good chance that while he is responsible for gutting China’s civil society and tightening the screws of dictatorship, Xi didn’t even know about the outbreak in Wuhan initially because in countries like China and the former USSR, local leaders default to flattery and good news when reporting to their superiors.

In all these cases, leaders have shown a willingness to court catastrophe for their own short-term self-interest, such that despite the U.S. and China’s political differences and adversarial relationship, both have reaped similar microbial whirlwinds. But again, the virus here isn’t Chinese or American – it’s authoritarian.

In addition to the antiviral drugs and vaccines that we should all hope will prove safe and effective against SARS-CoV-2, the authoritarian virus also requires an additional treatment. That treatment is to remember the selfish leaders who sat on their hands and suppressed inconvenient facts for fear of hurting their own political fortunes and to recognize their concerted efforts to mobilize our countries to combat the disease’s spread – however necessary and successful – for what they are: damage control to preserve those fortunes.