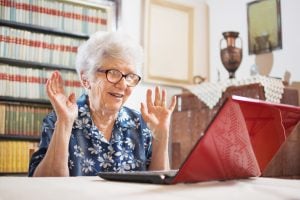 Sorry to Granny and the other 28 million Americans age 65 and older, but if it’s you or the economy, lots of Republicans are going with the GDP. Last night, Texas’s Lieutenant Governor Dan Patrick captured the gestalt, telling Fox’s Tucker Carlson that he’s “all in” only grandparents sacrificing themselves to preserve the American economy for the “grandchildren, that [] we all care about and [] we love more than anything.”

“No one reached out to me and said, ‘As a senior citizen, are you willing to take a chance on your survival in exchange for keeping the America that all America loves for your children and grandchildren?’” Patrick explained, as he urged Americans to throw in the towel and cut out that sissy social distancing. “If that’s the exchange, I’m all in.”

Indeed, it’s entirely credible that “no one reached out” to ask Patrick if he’d like to throw himself on the pyre, because that is f*cking crazy.

Patrick can invoke “lots of grandparents out there in this country like me” who “want to live smart and see through this, but I don’t want the whole country to be sacrificed.” But here on Planet Earth, those grandparents have consistently refused to raise the minimum wage, woefully underfunded public education, enjoyed the benefits of Medicare while fighting tooth and nail against single-payer healthcare, and consistently derided their own millennial and Gen-Z grandchildren as lazy and entitled. So the idea that those same seniors would now line up to make the ultimate sacrifice to protect them frankly beggars belief.

“My message is that let’s get back to work. Let’s get back to living.” Patrick continued. “Let’s be smart about it. And those of us who are 70 plus, we’ll take care of ourselves, but don’t sacrifice the country. Don’t do that. Don’t ruin this great America.”

REALLY? Exactly how will “those of us who are 70 plus … take care of ourselves?” Because a fatality rate of 2 percent in the 330 million person population means 6.6 million American dead. And while we’re all bloody sick of being trapped in the house homeschooling our kids, the non-sociopathic portion of the country isn’t ready to watch our parents drown in their own lung secretions in exchange for getting back to “normal.”

And of course, it wouldn’t be just a geriatric holocaust. ATL’s own David Lat is 44 years old, fighting for his life on a ventilator. Yesterday in New York City, 36-year-old high school principal Dezann Romain died of coronavirus. It’s not just those retirees, who aren’t even contributing to our all-important economy, who would die from Patrick’s Let ‘Er Rip scheme.

Under Patrick’s plan to buck up and save the economy, parents of medically fragile children would blithely go back to work, knowing that sacrificing their own kids is just the cost of protecting American businesses. You can’t buy a bottle of Purell for love or money, but, sure, we’re all just going to risk it with our kids’ health.

NFW, not even if Donald Trump tweets it out.

Our people want to return to work. They will practice Social Distancing and all else, and Seniors will be watched over protectively & lovingly. We can do two things together. THE CURE CANNOT BE WORSE (by far) THAN THE PROBLEM! Congress MUST ACT NOW. We will come back strong!

Tough luck, Meemaw! The president says we have to “protectively & lovingly” expose you to a highly contagious virus that will require an agonizing hospital stay at the cost of upwards of a million dollars and may well be fatal. And that’s not including the devastating impact of allowing the American medical system to become overwhelmed by simply allowing us all to become infected at once. Anyway, thanks for helping out with the grandkids, Bubbe!

We will not put a dollar figure on human life.

We can have a public health strategy that is consistent with an economic one.

No one should be talking about social darwinism for the sake of the stock market.

Yeah, what he said.