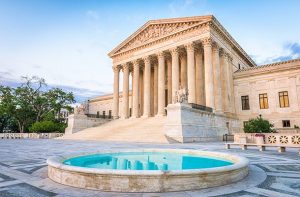 When a non-profit entity offered access to the official Georgia state code for free, the state government decided to sue, declaring such public access a “strategy of terrorism.” That alleged copyright violations could be lumped together with a suicide bombing campaign says a lot about either the broken intellectual property regime in America or the bankruptcy of leadership in the state of Georgia. Or, in this case, both.

Today, the Supreme Court put an end to this nonsense, shutting down Georgia’s copyright claim and declaring the Georgia Code in the public domain as “governmental edicts.”

It’s embarrassing that this required a 5-4 decision, but unlike most 5-4 decisions, this was not a testament to an ideologically divided Court but a generationally divided one. Roberts wrote the opinion, joined by the four most recent appointees: Kagan, Sotomayor, Gorsuch, and Kavanaugh. Thomas, Ginsburg, Breyer, and Alito (the only justice appointed after Roberts not to join him here) found different reasons to dissent from “allowing public access to the law.”

The wrinkle in this case deals with the annotations made in the official code. Georgia conceded that codified statutes would not be amenable to copyright protection, but claimed that the annotations made to the laws would be, even though the legislature commissioned the annotations and ordered them included with the statutes. The reason this matters at all is that Georgia — like many other jurisdictions — outsourced the creation of these annotations as a work for hire but refused to pay anything for the work, instead opting to issue, as the legal author, a reproduction license back to Lexis to allow Lexis to charge people for access to the work they performed on behalf of the state.

The rub for Georgia in this whole kerfuffle is that if the laws became public domain, the license becomes useless and states might actually be forced to pay third-party authors for the services the state government consumes. And that might require — gasp — taxes instead of privatizing essential government services, exploding the lie that you can get something for free.

The majority saw past this and in an opinion that amounted to an exasperated “come on, people!” the Chief Justice explained that a state government cannot mandate the inclusion of these annotations in the official pronouncement of state law and simultaneously contend that it’s not a governmental edict.

With common sense covered by the majority, the dissenters provided Freudian insights to ideological fights they’re willing to tie to cases by gossamer threads.

Ginsburg and Breyer, for their part, seem more worried that this decision might result in the unmoored holdings of an intellectually bankrupt judiciary earning undue deference. If the annotations are intended to inform the public of how judges — and not legislators — have interpreted the law, then they cannot be governmental edicts of the legislature.

Without saying so explicitly, Clarence Thomas and Sam Alito saw the majority as an assault on the foundations of the twin pillars of Textualism and Originalism. If mere annotations could carry the force of a “governmental edict” then we’re well on our way down the slippery slope of legislative intent and when annotations highlight later judicial interpretations, we’re far afield of the original public understanding of the law when written. For Thomas and Alito (Breyer joined parts of this dissent but we’ve already dealt with him) the question of copyright is just the conscious manifestation of the more burning concern that laws must be stripped of all context lest they become impossible to semantically manipulate. If that requires giving state governments the power to lock up access to state law in copyright, that’s a small price to pay.

In both instances, the older justices seem to be more interested in laying the groundwork to protect themselves from being burned in a future ideological showdown than in just declaring, “no, states can’t copyright the one publication they print purporting to contain the laws of the state.”

It’s a shame that this ended up in a divided ruling because it seems as though the break is entirely a function of the majority pigeon-holing this as a “government edict” to give it public domain status. At the risk of being branded the real Originalist here, the Constitution’s intellectual property language authorizes copyright legislation “To promote the Progress of Science and useful Arts” and it’s difficult to imagine the people who fought a war against a Star Chamber monarchy meant for this power to allow state governments to keep people in the dark about the law. Copyright isn’t about granting authors moral rights, it’s about encouraging progress. And that’s where it’s gone off the rails, because incentivizing creation through monopolistic economic rights is only a means not the end. When locking up access to material is no longer advancing science and art — like, say, keeping statutory notations under wraps — then it’s just not something the copyright authority can countenance.

But that sort of talk might inconvenience Disney, and that would really be letting the terrorists win.