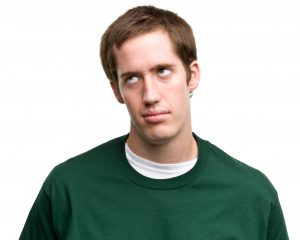 For some reason, lawyers always feel the need to speak their minds, even if there’s not much in those minds to begin with.

With the campaign season revving up, inboxes — both physical and virtual — are filling up with requests for donations from candidates hoping to be elected to offices ranging from dog catcher to POTUS. Most of us sift through the emails and either donate or toss the message accordingly. It’s at best a 10 second imposition on our daily routine to reject a flyer from a candidate we don’t like.

And while participatory democracy is a laudable ideal, ranting at a fundraising email isn’t really what Jefferson had in mind.

Peter Khalil is a Stanford Law grad running for the U.S. House in Washington’s Third District. As one might expect, he’s sending out fundraising emails. One of these found its way to a fellow Stanford Law grad who felt it wasn’t good enough to just ignore and decided to offer some concrete policy disagreements. And by “concrete policy disagreements” we mean a rant calling the candidate a commie and a “soyboy.” 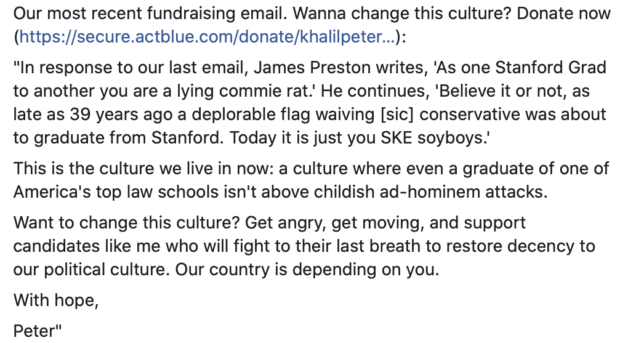 There’s strong “old man yells at cloud” energy on display here, but even though 39 years was a long time ago, age is probably less of a factor here than professional hubris. There’s a clutch of attorneys out there that sense with metaphysical certainty that their J.D. entitles them to an opinion on everything and, more disturbingly, an unshakeable belief that anyone else cares about that opinion. It’s a trait that’s all the more problematic because attorneys usually are some of the smartest people in the room and could make genuine contributions if they felt just enough humility to educate themselves before popping off.

Honestly, the problem here isn’t so much the childish, ad hominem attacks, it’s that they aren’t even clever childish, ad hominem attacks. When you stray too far from parody, it’s not window dressing on a well-meaning argument, it’s just a sad proxy for substance. Unfortunately, the right has created a virtual circle jerk to applaud each other’s vapidity one “soyboy” joke at a time. And if that atmosphere wasn’t already insufferably toxic… now they’ve got law grads.