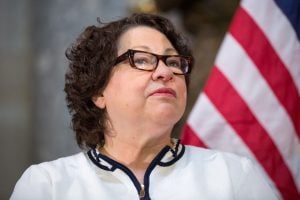 The conservative majority on the Supreme Court continues its inevitable task of remaking the law of the land in Donald Trump’s image. The latest insult happened Friday evening when the Court, on pure party lines, allowed the Trump administration’s immigration wealth test which limits legal immigration, to take effect in Illinois. It’s not a giant change to the status quo, since the test was a go in 49 states, but the decision crossed Illinois — the last state left — off of the list.

But that doesn’t mean the case didn’t ruffle some feathers on the Court.

Justice Sonia Sotomayor went off in a separate dissent that has been noted for its “caustic tone” and calling out of her colleagues on the bench. She describes the Court as kowtowing to the Trump administration, saying, “The Government seeks emergency relief from this Court, asking it to grant a stay where two lower courts have not. The Government insists—even though review in a court of appeals is imminent—that it will suffer irreparable harm if this Court does not grant a stay. And the Court yields.”

Though this has been a pattern in the Court as of late, Sotomayor sees the instant case as even more insidious:

“But this application is perhaps even more concerning than past ones,” Sotomayor continued. Previously, the DOJ “professed urgency because of the form of relief granted in the prior case—a nationwide injunction.” Now there’s no nationwide injunction, so there’s no apparent “urgency.” The DOJ “cannot state with precision any of the supposed harm that would come from the Illinois-specific injunction, and the Court of Appeals for the Seventh Circuit has scheduled oral argument for next week.” Yet SCOTUS lifted the injunction anyway. “It is hard,” Sotomayor wrote, “to say what is more troubling: that the Government would seek this extraordinary relief seemingly as a matter of course, or that the Court would grant it.”

And she describes the repeated pattern as “unprecedented” and that, like the boy who cried wolf, the “cries of urgency ring increasingly hollow”:

Claiming one emergency after another, the Government has recently sought stays in an unprecedented number of cases, demanding immediate attention and consuming limited Court resources in each. And with each successive application, of course, its cries of urgency ring increasingly hollow.

And we all know — and Sotomayor says it out loud — that the practice has “benefited one litigant over all others”: the current administration. Sotomayor compares and contrasts the treatment of death penalty litigants with that of the Trump administration and finds that Trump gets the benefit of the doubt. She notes, “This Court often permits executions—where the risk of irreparable harm is the loss of life—to proceed,” because they blame  death row inmates for the failure “to raise any potentially meritorious claims in a timely manner.” But yet the Trump administration gets a pass:

“Yet the Court’s concerns over quick decisions wither when prodded by the Government in far less compelling circumstances—where the Government itself chose to wait to seek relief, and where its claimed harm is continuation of a 20-year status quo in one State. I fear that this disparity in treatment erodes the fair and balanced decisionmaking process that this Court must strive to protect.”

Well, damn. At least someone said it.