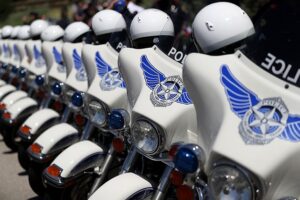 Law enforcement officers and officials are given a considerable amount of discretion. Too bad they so rarely use it.

The sheriff of Marquette County, Wisconsin decided to exercise his considerable discretion by threatening a teenager’s parents with jail over her Instagram posts. And for that misuse of his discretion, Sheriff Joseph Konrath is being sued. (h/t SBWisLaw)

A high school sophomore sued the Marquette County sheriff Thursday after he threatened to take her or her family to jail for her post on Instagram warning that she believed she had been infected with coronavirus.

The student, Amyiah Cohoon, went on a spring break trip with her class to Florida. It was cut short due to coronavirus concerns. Once she returned home, she developed COVID symptoms and went to the doctor. After a couple of hospital trips, she tested negative for the virus but was advised it was possible she had had it earlier but had been tested too late to get a positive result.

As was the style at the time, Cohoon made some social media posts about her health situation that weren’t entirely accurate.

She posted three messages on Instagram about her situation — one saying she wouldn’t be back for a while because she had coronavirus, one saying she might have to stay in the emergency room and one with her wearing an oxygen mask.

“I am still on breathing treatment but have beaten the coronavirus. Stay home and be safe,” she wrote in the last post.

These may have been slightly exaggerated. But they also could have been 100% truthful. The teen probably had no way of knowing. The lawsuit [PDF] quotes a release form from the ER saying Cohoon showed symptoms “consistent with COVID-19.” Not only that, but health experts have discovered some infected patients are testing negative for the virus.

Consistent with what the doctors told the Cohoons, some health experts believe that “nearly one in three patients who are infected [with COVID-19] are nevertheless getting a negative test result.” See Christopher Weaver, Questions About Accuracy of Coronavirus Tests Sow Worry, Wall Street Journal (Apr. 2, 2020).

Whether or not the posts were 100% accurate, the response from the Sheriff’s Department was 100% idiotic.

During the evening on March 27, Defendant Patrol Sergeant Cameron Klump from the Marquette County Sheriff’s office came to the Cohoons’ home. Amyiah answered the door, and Sergeant Klump said he needed to speak with her father.

Sergeant Klump stated that he had direct orders from Sheriff Konrath to demand that Amyiah delete this post, and, if she did not, to cite Amyiah and/or her parents for disorderly conduct and to “start taking people to jail.”

The sergeant also claimed Sheriff Konrath wanted the post removed “because there were no confirmed COVID-19 cases in the county at the time.”

The sergeant then told Amyiah directly that the sheriff had ordered him to issue citations for disorderly conduct if her post was not removed. Fearing her parents would be arrested, Amyiah deleted her posts.

Clearly, this conduct violated Amyiah’s First Amendment rights. If the best you can offer is something vague about “disorderly conduct,” you really have no case. Whether or not the posts were 100% medically accurate is beside the point. And the statements made by the sheriff’s deputy suggest the only reason the sheriff was demanding their removal was to keep the county’s case numbers at zero. Secondary to that was mollifying the school, which has issued its own stupid statement about Amyiah’s posts.

Administrator Meicher’s update stated that, “It was brought to my attention today that there was a rumor floating out there that one of our students contracted Covid-19 while on the band trip to Florida two weeks ago. Let me assure you there is NO truth to this. This was a foolish means to get attention and the source of the rumor has been addressed. This rumor had caught the attention of our Public Health Department and she was involved in putting a stop to this nonsense. In times like this, the last thing we need out there is misinformation…”

The lawyer representing the sheriff has confirmed the actions taken by the sheriff violated Amyiah’s rights… if only inadvertently. Not all lawyers are Constitutional experts, but any lawyer engaged in defending someone against First Amendment claims should know better than to say something like this:

Sam Hall, an attorney for the sheriff, said the teenager “caused distress and panic” among other parents by claiming she had contracted the coronavirus despite getting a negative test result. (And the Milwaukee Journal Sentinel — beneficiary of First Amendment protections — should definitely know better than to state this refers to speech not protected by the Constitution.)

“This case is nothing more than a 2020 version of screaming fire in a crowded theater,” he said, referring to speech that is not protected by the First Amendment.

This is a tell that your litigation opponent is the sucker at the table. That line is pulled from a Supreme Court decision that treated certain anti-war speech as a criminal offense, rather than protected speech. This precedent was walked back in a later Supreme Court decision. And it’s notable that everyone who quotes this line to defend their First Amendment violations omits one key word: “falsely.” It’s not illegal to truthfully scream fire in a crowded theater or even to do so while the existence of an actual fire may still be in dispute. The smell of smoke alone can justify shouts of fire.

If this is the legal defense the sheriff plans to mount (“aggressively,” according to his legal rep), he’s screwed. The school could have spoken to the student’s family directly and expressed its concerns with the post. And that may have been resolved amicably. Or everyone could have done nothing and lived through the apparent panic Amyiah’s posts failed to provoke. But everyone got stupid and now there’s a Constitutional lawsuit to be dealt with. Discretion is only a positive when it’s exercised in a way that’s beneficial.