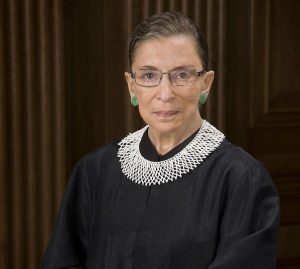 I would like to show my granddaughters that the equal citizenship stature of men and women is a fundamental human right. The union will be more perfect when that simple statement — that men and women are persons of equal citizenship stature — is part of our fundamental instrument of government. So even if the argument is it’s largely symbolic, it is a very important symbol.

— Justice Ruth Bader Ginsburg, in comments given about the Equal Rights Amendment (ERA) during a recent appearance at Georgetown Law. Ginsburg said that rather than try to get the 1970s version of the proposed amendment made part of the Constitution, she’d like to “see a new beginning” and “start over.” She continued, “There’s too much controversy about late comers. Plus, a number of states have withdrawn their ratification. So if you count a latecomer on the plus side, how can you disregard states that said we’ve changed our minds?”

(Thirty-eight states were needed to ratify the ERA, which was originally sent to states in 1972 with a seven-year deadline for ratification. That deadline was later extended to 1982, but not enough states followed through in time. Nevada (2017), Illinois (2018), and Virginia (2020) recently ratified the ERA, with Virginia becoming the last state needed for ratification. The Justice Department refused to accept the state’s approval, stating it came decades too late (not to mention the fact that five other states have moved to rescind their ratifications), and litigation has commenced.)