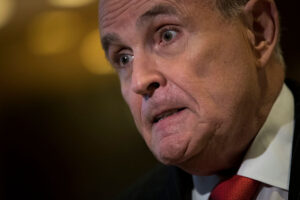 I just keep getting disappointed. I got about five friends left.

— Former New York mayor Rudy Giuliani, who currently serves as President Donald Trump’s personal attorney, in comments made after he thought he hung up the phone with a reporter from the New York Daily News. After aligning himself with the president, Giuliani has reportedly become “political poison” among his former circle of friends.

Without realizing he forgot to hang up the phone, Giuliani was carrying on a conversation where he spoke negatively about former New York governor George Pataki, who claims in his upcoming book that Giuliani asked him to call off New York City’s 2001 mayoral election so he could remain in office to handle the aftermath of the 9/11 attacks. “He’s trying to sell a book,” Giuliani said, unaware that the Daily News reporter was still on the line. “Even if we would have had that conversation, it would have been privileged between a mayor and a governor … He’s an honorable guy. I can’t believe he would do that. [He’s trying to make me] sound like a power-hungry politician.”