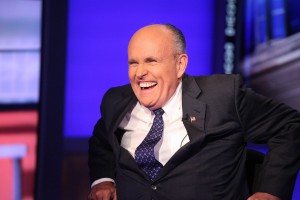 The president’s free lawyer is back from his Excellent Eastern European Adventures and hopes to present his book report to the Senate real soon.

“He’s going to make a report, I think to the attorney general and to Congress,” Trump promised earlier this month, adding, “he has a lot of good information.” By which he means some hallucinatory meanderings accusing investment giant Franklin Templeton of laundering $7 billion of stolen Ukrainian government assets back into Ukrainian government bonds. And that’s not even a joke.

“I’m working on pulling it together and hope to have it done by the end of the week,” he told the Washington Post.

Unbelievably, the august members of the upper chamber have one or two tiny reservations about America’s Mayor.

“I wouldn’t trust Rudy to represent me in a parking dispute so I’d say avoid,” a senior GOP Senate aide told The Daily Beast. Which is downright unkind! Who among us hasn’t managed to talk our client into an impeachment by convincing him that Ukraine hacked the DNC server, then framed Russia and smuggled the equipment over to Kyiv, only to bury it in some oligarch’s backyard where it sits today just waiting for the president to insist on its prompt return? (Again, not a joke.)

“Rudy Giuliani long ago lost any shred of credibility, especially after the dossier he assembled for the State Department stunningly mirrored Russian propaganda,” Sen. Bob Menendez, D-N.J., told the Daily Beast. “Knowing that, anyone that attempts to defend President Trump’s behavior by citing Rudy’s information over our own intelligence agencies is simply irresponsible, uninformed, or willing to be that useful idiot the Kremlin desires.”

Well, he would say that. He’s a Democrat and doubtless trapped under Nervous Nancy’s iron thumb. Surely, Rudy will be better received by his fellow Gippers.

“My advice to Giuliani would be to share what he got from Ukraine with the IC [intelligence community] to make sure it’s not Russia propaganda. I’m very suspicious of what the Russians are up to all over the world,” Lindsey Graham, R-S.C., said.

How odd! Especially after the State Department already refused to act on Rudy’s last book report, compiled with the help of a graduate of the KGB academy in Moscow and a Ukrainian parliamentarian from the pro-Russian Party of Regions.

“It’s not Russian propaganda,” Giuliani told the Daily Beast. Which should, after all, settle the matter. He is after all a world-renowned cyber expert and former Attorney General of the United States.

It’s just bizarre that not a single senator will agree to meet with him. Inexplicable, really.