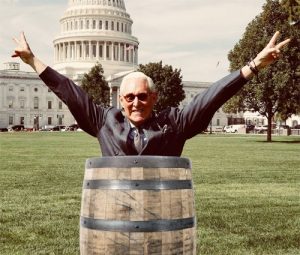 Great news, America! We may be confined to our homes during a deadly pandemic, but at least we won’t have to suffer through yet another Roger Stone hearing. Describing his motion as “a tower of indignation, but at the end of the day, there is little of substance holding it up,” Judge Amy Berman Jackson denied Stone’s petition for a new trial based on juror misconduct. Turns out, you can’t claim evidence is “newly discovered” just because your lawyers and jury consultants couldn’t be bothered to do a Google search during the trial. Who knew?

In November, a jury convicted the self-described dirty trickster of obstruction, false statements to congress, and witness tampering. After a sustained attack on the prosecution by Donald Trump and his merry band of howler monkeys, the jury foreperson identified herself in a social media post defending the Justice Department’s handling of the trial. At which point, the defense team had the novel idea to do a Google search of her name and social media presence.

The juror had straightforwardly admitted in the jury questionnaire that her social media might contain posts commenting on the Russia investigation. And yet, it failed to occur to anyone on the defense team to investigate this further before the trial. Nor did it occur to them to ask her any further questions about potential bias during voir dire.

At the time of the trial, though, the defense made a strategic choice not to look for social media information. None of the seven lawyers or the two jury consultants on the defense team performed the rudimentary Googling that located this set of Facebook and Twitter posts: not 7 during the two months they were in possession of the entire set of jury questionnaires with the jurors’ names on them; not during the four to five days before trial when they knew the exact order in which the members of the jury panel would be questioned and seated as jurors; not during the two days of jury selection; and not overnight after the twelve jurors and two alternates had been picked and instructed to return the next morning to be sworn.

And what did Stone and his illustrious counsel discover once they figured out the password for the WiFi? They found that the juror doesn’t like the president. And that she is a Democrat. And that she got her photo taken with Democratic strategist Donna Brazile once in 2008. All of which is perfectly consistent with her admission that she’d run for Congress as a Democrat and served in local political groups when she lived in Tennessee.

But to Roger Stone, it was “newly discovered information” which proved that the foreperson’s “answers were equivocal, misleading, deceptive, evasive, and fallacious.”

Deriding his “parade of adjectives,” Judge Jackson noted that dislike of the president does not equal bias against Roger Stone, as “linking them together in a sentence does not make them one and the same.” Because who would think that a low-rent, hanger-on ratf*cker had any power in Washington, anyway, right?

At bottom, the motion appears to be based on the defendant’s assumption that the juror must have known who he was, what his relationship with Donald Trump has been over time, and what role he played in the campaign, and that since he was so central to the election, one could not possibly view him independently from the President. See Mot. Hr’g Tr. at 45–46. But there is no basis to conclude that Roger Stone was a household name in either Washington, D.C. or in the foreperson’s home state, particularly given his short and informal association with the campaign.

Noting that the juror only made her social media private after the president sicced his wingnut minions on her, Judge Jackson observed that “the problem is not that the material could not be discovered; it was not discovered. And it was not discovered because no one was looking for it.” None of the five lawyers, the paid jury consultant, nor the Defendant himself — who knows a few things about social media, from his own assiduous trolling — could be bothered to type this woman’s name into their phones. FFS, the courthouse itself has WiFi!

Whodathunk that a legal team which stumbled into the case by botching the pro hac vice motion would make such a boneheaded mistake? What a shocking turn of events!