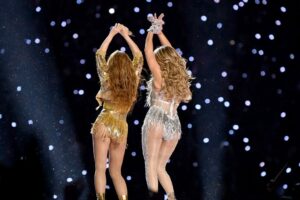 Right-wing podcast star “Coach” Dave Daubenmire want to sue the Super Bowl for keeping him out of the Kingdom of Heaven, and he wants you to join in with him.

Daubenmire, who refashioned himself into a right-wing hero after the ACLU forced him to stop proselytizing to high school football players in London, Ohio, is extremely upset about the “pandering pornography” of Sunday night’s Super Bowl halftime show. Although he refused to watch Jennifer Lopez’s pole dancing and Shakira’s zaghrouta because he “didn’t want to let that spirit come into my house,” Daubenmire is very upset about a mythical 12-year-old boy (without internet access), who tuned in to watch grown men whack the crap out of each other only to find himself unceremoniously thrust into a hormonal inferno.

“Would that halftime show, would that have been rated PG? Were there any warnings that your 12-year-old son — whose hormones are just starting to operate — was there any warning that what he was going to see might cause him to get sexually excited?”  

Who will join this brave patriot in demanding judicial redress for this grievous injury to our collective mortal souls, which have been willfully, knowingly, recklessly, and negligently jeopardized, with actual malice, by force, using undue influence, and per se outside the four corners of our cable contracts?

All he needs is a lawyer willing to take his case.

“That’s discriminatory against the value I have in my house. You can’t just do that,” Daubenmire said on his Monday podcast. “I wanna sue them for about $867 trillion.” Plus punitive damages, no doubt.

Right Wing Watch was first to flag the video.

Daubenmire continued with his theme of “Crotch shots! Dare I say that? Crotch shots!”  in a Facebook post later that day.

I’m serious as a judge here. I’m looking for a lawyer out there, someone who will join me in a class action lawsuit against Pepsi, the NFL, my local cable company — I don’t know who all we would sue. But sue as many people as we want to for pandering pornography.

Maybe that’s not the right charge, I’m not a lawyer.  Contributing to the delinquency of a minor. What we saw yesterday was a strip club performance at halftime in the Super Bowl .

Perhaps “pandering pornography” is not “the right charge” after all. After the “Nipplegate” saga of the 2004 Super Bowl, when Justin Timberlake exposed Janet Jackson’s breast during the halftime show, the FCC was deluged with complaints. The handful of private lawsuits against Timberlake, Jackson, and Viacom came to nothing.

But that was different! Does the First Amendment give Jennifer Lopez the right to come into Dave Daubenmire’s living room, where he is most definitely not watching that diabolical halftime show, and send Dave Daubenmire straight to hell? Won’t anyone think of the children?

Love ATL? Let’s make it official.
Sign up for our newsletter.

From the Above the Law Network

Love ATL? Let’s make it official.
Sign up for our newsletter.