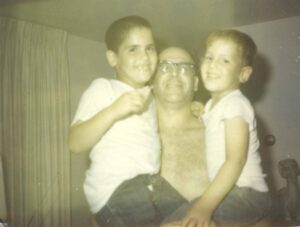 On April 8, I celebrated my abstinence-based, 13 years in long-term recovery from alcohol, cocaine, and bulimia (Yes, males develop eating disorders).

I reflect with mixed feelings as it also falls on what would be the 94th birthday of my father whose passing 18 months ago is still fairly raw and painful.

Of course, my recovery anniversary will always fall on his birthday, and there will always be tears for that, but his passing seems to hit especially hard as I sit at home with millions of others in the heart of the trauma, uncertainly, and anxiety wrapped around the COVID-19 pandemic.

I think that some of my angst also correlates to suddenly being hyperaware of my mortality, churning toward 60 and on the cusp of the COVID-19 “high-risk” age demographic. Wasn’t it just yesterday that I was 18? Where the hell did the years ago? The irony is that I can’t remember many of them in the haze of drugs and alcohol.

I do remember my father’s role in my recovery. The memory of walking over to his place fresh off my second trip to a local psychiatric hospital after a drug- and alcohol-induced blackout is one that remains vivid and sometimes rebroadcasts in high definition in my dreams.

That morning, early April 2007, I stood at his door, ashamed, guilty, and broken. He had no idea that I struggled with drugs and alcohol. I justified my silence so as not to be a burden him in his golden years.

I lurked outside his apartment door for five minutes, crying and almost going home. I finally knocked. He answered the door, and as usual, was ecstatic to see his middle son. As usual, he offered me something to eat. As usual, he asked if I needed any money. It didn’t matter what my financial status was. He asked.

That morning, I only wanted his love, which I received every moment of every day from the time I was born.

He held me. He cried with me. Then he said the one thing that defined everything he had taught his sons growing up.

“Brian, I love you. Move in with me, and we will get through this together.”

I lived with him for a week while I attended my 12-step meetings and shuttled between his place and mine to take care of my pets.

My father, Norton, of the greatest generation. My father gave me the greatest gift. The gift of a father talking to his son and letting him know he is loved. My father, without knowing it, allowed me to take another step in recovery, beginning the process of self-love and allowing myself to accept it.

I hope he is smiling down at my milestone and as soon as the stay-at -home order is lifted, I will head on over to his resting place, his new home, and tell him about it. Ironically, it is also, walking distance.

Brian Cuban (@bcuban) is The Addicted Lawyer. Brian is the author of the Amazon best-selling book, The Addicted Lawyer: Tales Of The Bar, Booze, Blow & Redemption (affiliate link). A graduate of the University of Pittsburgh School of Law, he somehow made it through as an alcoholic then added cocaine to his résumé as a practicing attorney. He went into recovery April 8, 2007. He left the practice of law and now writes and speaks on recovery topics, not only for the legal profession, but on recovery in general. He can be reached at brian@addictedlawyer.com.