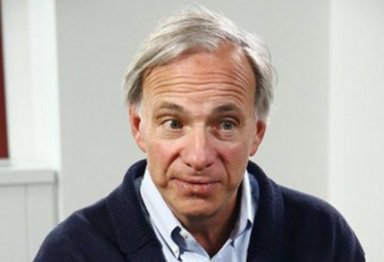 A little more than a month ago, Ray Dalio retreated from our increasingly horrible everyday world to his presumably COVID-free gilded survival bunker and cave of contemplation to do some serious thinking about the global pandemic and also keep his 70-year-old corporeal form alive and healthy. And serious thinking and Principle application there was to do, for he who loves to be wrong has certainly been wrong about a lot of things lately, as amply demonstrated by Bridgewater’s flagship hedge fund. Given all of that, and the steady drumbeat of bad news and stupidity bombarding Dalio’s self-quarantine, we’ll be honest that downright giddiness is not what we were expecting when he emerged to deliver his findings on his favorite medium, LinkedIn.

“I think we should be very excited about the new future,” he continued.

“We’re now in a wonderful revolution in terms of the capacity to think and use that in a way. I would say that is absolutely the most treasured thing in the future.”

Dalio said the current downturn — painful as it is — would be “relatively brief” and would allow for a wider global “restructuring.”

That restructuring could last three to five years, he said.

“I know that’s a long time, but it’s not forever,” Dalio told LinkedIn’s editor in chief, Dan Roth. “The human capacity to adapt and invent and come out of this is much greater.”

Ugh, that is a long time. Even longer than a Dalio LinkedIn post. So what, precisely, will it take to emerge from this nightmare stronger and greater than before?

Ray Dalio predicted… that self-sufficiency, creativity, adaptability and bipartisanship will be the keys to economic recovery.