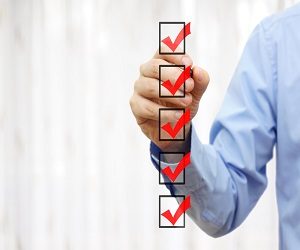 I litigated for twenty-five years, but then I swapped litigating for my in-house role, which involves supervising litigation. I’ve now been supervising for ten years, which means 1., I’m old, and 2., I’m out of practice, so I’ll never return to life at a firm.

I went through my old files, and I ran across my old crib sheet containing some of the general rules for preparing witnesses for cross-examination at trial. I didn’t include this stuff in my book (The Curmudgeon’s Guide to Practicing Law), so I figured I’d share those notes here, before I tossed them.

What do you tell all witnesses before they’ll be cross-examined at trial?

First: Do not change your demeanor on cross.

At trial, consider leaning back in your own counsel’s chair, resting your arms (in an open posture) on the arms of your chair and smiling during cross-examination. That way, when the witness glances at you (as all witnesses do) during cross, the witness will realize that he’s changed his demeanor on cross and will, at least briefly, correct the error.

Be the same helpful person on cross as you are on direct.  After all, the jury’s watching.

Thus: Tell your witness not to answer monosyllabically. Answer in full sentences instead. It’s not hard.

Cross, trying to elicit a one-syllable answer: “Your name is Mark Herrmann, correct?”

Good witness: “My name is Mark Herrmann.” (Perhaps nodding, showing that the witness is trying to be helpful.)

Cross: “You’re wearing a white shirt; is that true?”

Good witness: “I do have on a white shirt.”

Good witness: “I do have on a white shirt.”

Third: Own your answers.

Don’t be sheepish. Everyone will be impeached on cross. It happens.

So don’t look guilty when it happens. Look pleased and happy, like you’re winning. (The jury may not know who’s winning. If the witness looks happy, the jury may assume that the witness is ahead.)

Part of that game is owning your answers: Not, sheepishly, “No,” or “I guess not,” or “Maybe I was wrong.” Instead, confidently, “Of course not,” as though only a fool would think otherwise. Say it proudly: “Of course I shot my dog.”

Don’t look as though you’re being savaged on cross.

Fourth: Look where the jury is looking.

That’s the way people act, and it’s right at trial. Do it.

Fifth: Use the headline theory of testifying.

You’re not writing a novel, element by element, on cross-examination, leading to the final denouement. Instead, you’re writing a newspaper article: Ninety percent of your readers won’t get past the opening paragraph. So don’t bury the lede. Put the important part of the answer in the first sentence.

Those are my five major rules.

There are, of course, a ton of other things that you might like to discuss with a witness before putting the witness on the stand.

Some of it is stylistic: Don’t talk too fast; that looks evasive. Don’t touch your face.

Some of it is just courtroom sense: Always smile after the judge rules on an objection. (The jury may not know who won or lost. But they’ll know that you smiled. That makes you the winner.) You’re on trial within a block of the courthouse. (Don’t park your $65,000 Mercedes near the courthouse. The guy parking the beat-up jalopy next to you will end up on the jury. Don’t criticize the judge in the elevator. The unknown person behind you in the elevator will turn out to be the judge’s clerk. In the bathroom, those stalls were not actually empty.)

But those rules will come with time.

For starters, you might just discuss with your witnesses the five general rules of cross-examination.

Mark Herrmann spent 17 years as a partner at a leading international law firm and is now deputy general counsel at a large international company. He is the author of The Curmudgeon’s Guide to Practicing Law and Drug and Device Product Liability Litigation Strategy (affiliate links). You can reach him by email at inhouse@abovethelaw.com.