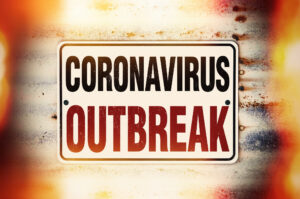 While media — in particular social media — seems unable to grasp this, it is possible to have a serious pandemic and not react with breathless panic. There’s an illness out there with no vaccine that spreads even when carriers are showing no symptoms. But it’s also not lethal for most of the population and — because it requires close contact to spread — fairly easily defeated by vigilant hygiene. All these things can be true!

All this is to say, that people need to lay off of Lawrence Garbuz, the New York attorney who tested positive for COVID-19 and currently has over 50 cases traced back to him. The state locked off New Rochelle due to the outbreak traced to Garbuz.

Speaking with the local NBC affiliate:

“I hope the Garbuz name becomes associated not as the ones with coronavirus but the ones who were instrumental in helping get this contained,” Adina Lewis Garbuz wrote on Facebook Tuesday afternoon. “I have not wanted to speak out as I have no urge to be in the limelight and I am sure my husband would be most horrified knowing he was, but I am willing to if it in any way can be helpful to others, to allay fears and restore feelings of calm.”

While you’d like to think we live in a society that doesn’t blame people for catching a disease, that’s sadly not where we are right now. Even charitably affording people the viewpoint that they aren’t blaming him for catching the disease, but for spreading it, this strikes at the principal danger of COVID-19: it spreads even when patients are showing few if any symptoms. None of this is Garbuz’s fault, so just cut him a break here. And remember that it takes two to tango here: wash your hands and keep some distance (though, no, you don’t need to become a hermit) and you’ll be alright even if the person down the hall has the bug unbeknownst to them.

In fairness, you should have been doing this the whole time. The flu is deadly to vulnerable populations too, so these hygienic measures shouldn’t stop even after this is eventually declared under control.

“It is easy to be fearful and scared and believe me, my family has been seen plenty of irrational bad behaviors based on it,” she said, referencing a laundromat that refused to serve her children despite them being out of the country and cleared by the Centers for Disease Control, or a nurse who “hugged the walls” as they walked by. But Lewis Garbuz implored that people not let emotion and fear control their behavior, writing that “We are in very unchartered (sic) waters with this virus and unknowns are scary but we also know quarantines and testing are helping. Let facts override bad thoughts.”

This is what a breakdown in public health information looks like. A government that wasn’t proposing a $1.2 billion cut to the CDC right now could be doing a lot more to keep people both safe and calm instead of letting panic run wild.

Not that the lawyers are helping the situation trying to substitute their judgment for doctors even though their failure to grasp organic chemistry is the only reason they became lawyers in the first place. And don’t think we haven’t noticed some of you suddenly lobbying for more restrictive government measures than the public health officials recommend. We see your clients’ force majeure clauses. We’ve got prominent political figures out here acting like the disease wouldn’t really exist if Trump weren’t president, which is dangerous levels of magical thinking. Not everything needs to be cast in absolutes — Trump’s failures can be pronounced without pretending he’s the cause of a worldwide outbreak.

Everyone just needs to stop. Listen to doctors. Keep clean and stay home if you’re sick or vulnerable. Don’t be a panicky jerk blaming people for catching something.