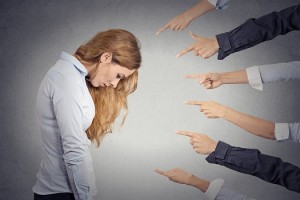 As mentioned in prior articles, many attorneys focus far too much on insulating themselves from liability. Indeed, lawyers are often afraid to look bad in front of their bosses or face malpractice claims, and this sometimes forces many attorneys to cover themselves at the expense of their clients. One reason why attorneys may focus on shielding themselves from blowback is because partners at a variety of law firms often concern themselves more with assigning blame when something goes wrong than simply solving issues. Nevertheless, partners should focus less on assigning blame and should strive to spend the most energy possible finding solutions for clients.

Lawyers, like every other type of professional, mess up from time to time. Sometimes, attorneys screw up because they are inexperienced and do not know the correct procedure or substantive law to solve an issue. Pretty much every “baby lawyer” has a hard time figuring out when notices to admit need to be responded to, when paperwork needs to be filed, and all of the other practical legal strategies that professors don’t teach you in law school. In addition, lawyers sometimes mess up because they are too busy. I once worked at a firm where attorneys were responsible for handling hundreds of cases, and it was naturally easy for something to slip through the cracks with such a workload.

At some of the firms at which I worked, partners were not particularly focused on assigning blame, and used mess-ups as teaching moments. If something was not filed properly or was filed after a deadline, this was typically a good learning experience for how to properly litigate matters. Most screw-ups can be fixed, and few will kill a litigation matter or deal. As a result, there was usually ample opportunity to focus on solving problems and learning for future situations.

However, I also worked at firms where partners spent far too much time trying to figure out who exactly screwed up when something went wrong. These partners were like Captain Hindsight (there is a long history of Above the Law writers citing to South Park!), trying to piece together email chains and other evidence needed to figure out precisely who was to blame for a misstep. While it may be important to find out who is the weakest link on a team to guide future employment decisions, it was often absurd how much time and energy partners spent on figuring out who had messed up.

When I worked in Biglaw, I was once tasked by a partner to assist her in an investigation of who had screwed up on a particular project. Our team had written a motion that had been denied by the judge. In a footnote of the judge’s opinion, the judge said that one of our citations did not stand for the proposition that we said it stood for in the brief. Since it is uncommon for a court to point out such a misstep in a footnote, we were somewhat embarrassed in front of the client for this issue.

Since I hadn’t worked at the firm when the motion was briefed (and could therefore not be assigned any blame) the partner tasked me with figuring out who was liable for this situation. While I can understand why a firm would want to do a retrospective on how the faulty citation ended up in the brief, this more introspective type of assessment was above my pay grade. I was simply tasked with determining if there was actually a mess-up and who was responsible for dropping the ball.

I ended up telling the partner that the proposition that was cited in the brief was in the case cited, but simply in a different place in the opinion than the location referenced in the citation. It was a stretch to make this assertion, but I wanted to protect the associates and just complete the task investigating the mess-up with as little blowback as possible. However, there was really no reason to focus so much on assigning blame, and we could have simply changed our procedures moving forward without worrying associates that they might face serious consequences from a relatively minor mess-up.

Again, I’m not saying that it is bad for law firms to be reflective and assess on how they messed up and how they can improve in the future. However, partners should not perpetuate a culture where blame is delegated over focusing on how to solve an issue. Needlessly assigning blame can hurt morale and divert resources away from fixing problems.