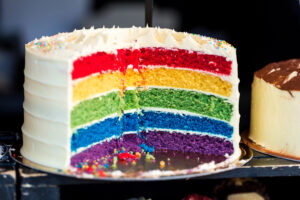 If there are rakes left to step on in Kentucky, the principal at Whitefield Academy will find them. Dr. Bruce Jacobson, head of the private Christian school in Louisville, found himself at the center of a firestorm three weeks ago when he expelled a student because her mother posted a photo on Facebook of her daughter celebrating her 15th birthday with a rainbow cake.

And she was wearing a rainbow sweater!

“The WA Administration has been made aware of a recent picture, posted on social media, which demonstrates a posture of morality and cultural acceptance contrary to that of Whitefield Academy’s beliefs,” Jacobson wrote in an email on January 6, the day before the child was scheduled to come back from Christmas vacation. “We made it clear that any further promotion, celebration or any other action and attitudes counter to Whitefield’s philosophy will not be tolerated. As a result, we regret to inform you that [the child] is being dismissed from the school, effective immediately.”

But Dr. Jacobson couldn’t leave it there. After the child’s mother Kimberly Alford went to the media, Jacobson released confidential information about the child’s disciplinary record and her sexual orientation to the press.

“In fact, she has unfortunately violated our student code of conduct numerous times over the past two years,” the school told the Washington Post in an email. “In the fall, we met with the student to give her a final chance to begin to adhere to our code of conduct. Unfortunately, she did not live up to the agreement, and therefore, has been expelled.”

Then Rod Dreher, senior editor at the American Conservative, did some digging into the sexual-identity of a 15-year-old girl and decided to publish it in an article entitled “Rainbow Cake Girl: The True Story.” Which is in itself a statement about American conservatism in 2020.

My understanding is that [the child] had a long, specific list of repeated infractions — bullying, disrespecting teachers, vaping in school (as Alford acknowledges), and so forth. Part of what she has allegedly done is promoting LGBT consciousness in the school, including aggression on that front. I’m trying to be delicate here, but I can tell you that she has transgressed against other students on this front, to promote bisexuality. For example, she allegedly drew rainbows and wrote slogans like “bi pride” on other kids’ papers, and gave at least two different girls the impression that she was sexually harassing them.

He then posted several images from the child’s private Instagram account. Because Rod Dreher is a creep.

He is also a named defendant in the lawsuit filed by the child’s parents yesterday in Jefferson County Circuit Court. They allege breach of contract, since the school released the child’s personal records and failed to follow its own escalating disciplinary policy, which allows for “an opportunity for mercy and grace through contrition,” rather than summary expulsion because the some nosy assh*le screengrabs a photo which confirms the school’s suspicion that the child is gay.

The suit alleges defamation, intentional infliction of emotional distress, and invasion of privacy by the school and American Conservative, as well as by Jacobson and Dreher personally. It further alleges that the child’s disciplinary record consists of cutting lunch once and getting caught with a Juul, after which she was referred to the school counselor who treated the child’s nicotine habit with a book entitled “Gay Girl, Good God: The Story of Who I Was, And Who God Has Always Been.” Which must have been very helpful.

The child’s parents are seeking a jury trial. And while private schools have wide latitude to discriminate against gay kids and defamation is difficult to prove, outing a 15-year-old girl in the national media might not endear the defendants to a jury in liberal Louisville.