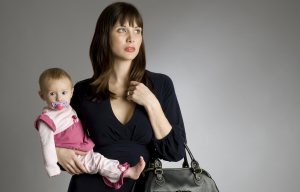 Ed. note: This is the latest installment in a series of posts on motherhood in the legal profession, in partnership with our friends at MothersEsquire. Welcome Jennifer Kleier to our pages.

Not long ago, a friend shared an example with me that she believes illustrates the difference between mothers and fathers. The example went something like this: There is only one piece of cake left and three children. A mother cuts the cake into three equal pieces and gives one to each child, taking nothing for herself. A father cuts the cake into four equal pieces, gives one to each child, and takes one for himself. I later shared her example with my husband and he was, rightfully so, very insulted. The point of her example was to demonstrate how the mother is a better parent because she was willing to sacrifice, or be a martyr, for her children. To me, it’s the perfect representation of the idealistic and unfair expectations we place on mothers. I’ve found that quite often those same expectations extend to women as lawyers and it’s just as unfair.

I started my legal career in 2010 as a public defender. It was my dream job at the time because I saw it as an opportunity not only to gain valuable courtroom experience but to help others much less fortunate than myself.  I knew being a public defender wouldn’t be easy but had no way to appreciate the actual sacrifices it required until I was in the thick of it. It demanded long hours for little pay while representing clients who often don’t appreciate you, don’t respect you, and don’t listen to you. More often than not, my days ended with me exhausted, stressed, and unsure as to whether anything I had done that day actually made a difference. The more I sacrificed for my job the more I took on the role of a martyr, a view which was reinforced by others. I can’t tell you how often I would tell people what I did for a living and would hear a response such as, “Wow, that’s such a tough job. And it’s so impressive that you can do it.” Hearing someone acknowledge your sacrifices feels good. But it’s dangerous because it has the unfortunate side effect of creating a false feeling of superiority, devaluing the work that others are doing.

I gave birth to my first child a few months before my four-year anniversary at the public defender’s office. Coming back from maternity leave, I felt like I was drowning. Between work and being a mother, I was overwhelmed with trying to meet others’ expectations of me. I felt like my worth as a mom and a lawyer was being judged solely by the sacrifices I was willing to make. My physical and mental health began to decline and I knew I had to make a change.

In 2015, an opportunity presented itself and I left the public defender’s office for private practice. I joined a small, newly formed law firm where I was the only associate. The two partners in the firm were both male and had been practicing for decades. It was a much different work environment, yet I struggled to get rid of the martyr mentality. I continued to feel like I had to be everything for everyone, all the time. Since that’s an impossible task, I always felt like I was failing.

After giving birth to my second child in 2016, I finally began to realize that simply changing jobs wasn’t enough. I had to take affirmative steps to change my mindset. Every day presents new challenges but I have made significant improvements by employing the following techniques:

1) No longer expecting others to read my mind. I work hard to listen but also be direct about my feelings and needs.

2) Recognizing that I have choices and no longer expecting that I will be rewarded for suffering.

3) Identifying my unspoken expectations of myself and others and asking whether those expectations are reasonable.

4) Accepting that not everything will turn out the way I want and appreciating others regardless.

5) Seeking help from others.

These strategies have been successful not only in my law practice but at home as well. When I employ them consistently, I give myself the opportunity to succeed versus constantly sabotaging myself.

I also came to realize that neither my clients nor my children need me to be superwoman. And that by feeding into the idea that they do, I’m doing a disservice to myself, to them, and others around me. I have sacrificed and made hard choices both for my children and my clients but its important that my needs and desires are respected too. By not making myself a martyr, I am teaching my children that while my love for them is unconditional, being part of a community requires a delicate balancing of everyone’s needs. Setting a good example for both my children and my clients will help them to be more successful in their future endeavors. And hopefully, just hopefully, everyone can enjoy a piece of the cake without any guilt. 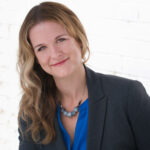 After graduating from the Brandeis School of Law in 2010, Jennifer Kleier served the public by working as a public defender for the Louisville Metro Public Defender’s Office. Jennifer entered private practice in 2015 and is a partner in Karem & Kleier Law. She practices in the areas of criminal defense, family law, personal injury, and estate/probate law. She is an active member of both the Kentucky Bar Association and the Louisville Bar Association. Jennifer helped to create the Louisville Bar Association’s Gender Equality Committee and currently serves as its chair. She is a City Councilor for Audubon Park, Kentucky, is a member of the 2019 Louisville Bar Association’s Leadership Program, and a member of the Women Lawyer’s Association in Jefferson County. She was also honored to be an associate member of the Louis D. Brandeis Inn of Court from 2016-2019. She’s a proud mom of two beautiful girls, two dogs, two cats, and married to a loving and supportive spouse. In her free time, she loves to hang out with her family, read, bake, and do just about anything active.