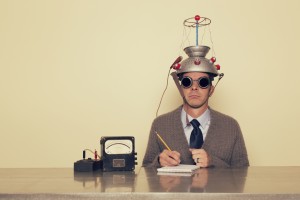 Today’s lesson in Stay in Your Own Lane comes courtesy of esteemed NYU Law professor Richard Epstein, who published an article on March 23 entitled “Coronavirus Perspective” with the Hoover Institution, where he is a Senior Fellow. In the piece, Epstein used “Darwinian economics” to prove that actually the doctors and epidemiologists are all wrong, and this whole coronavirus thing is NBD.

Epstein’s “Perspective” includes some extremely strange assumptions about the evolution of viruses, which he postulates must always weaken over time.

At some tipping point, the most virulent viruses will be more likely to kill their hosts before the virus can spread. In contrast, the milder versions of the virus will wreak less damage to their host and thus will survive over the longer time span needed to spread from one person to another. Hence the rate of transmission will trend downward, as will the severity of the virus. It is a form of natural selection.

The entire essay reads like a generation skipping trust drafted by a dermatologist — no visible pores, but it’s full of holes. And yet, according to the Washington Post, it’s been passed around approvingly in Trumpland to support the assumption that this whole annoying pandemic thing is getting blown way out of proportion. Because the people running our government read this passage, and thought, Yeah, this guy really get it!

By way of comparison, the virulent AIDS virus that killed wantonly in the 1980s crested and declined in the 1990s when it gave way to a milder form of virus years later once the condition was recognized and the bath houses were closed down. Part of the decline was no doubt due to better medicines, but part of it was due to this standard effect for diseases. Given that the coronavirus can spread through droplets and contact, the consequences of selection should manifest themselves more quickly than they did for AIDS.

Literally everything in this paper is nonsense, even granting Epstein the mulligan of “correcting” his U.S. mortality estimate up from 500 to 5,000. (As of this writing, it’s 2,571.) And yet, Epstein decided it would be a smart idea to give an interview to The New Yorker’s Isaac Chotiner to explain why he, a law professor, was uniquely qualified to tell those Chicken Little epidemiologists what’s what.

It was NOT a smart idea.

“You start off with this virus, and there’s a range, some of which are very serious and some of which are less, so it’s a theory of natural selection with a normal distribution set,” Epstein told Chotiner, continuing with his bizarre assumption of strong and weak strains of the virus. In this entirely theoretical universe, someone with the “strong version” infected everybody at the nursing home in Kirkland, Washington, and the high fatalities there can be traced to “either people who are in the facility or people who have family members who hugged and kissed people in the facility. So they got large doses of intense viruses.”

Chotiner spliced the interview with fact checks from IRL doctors going WTF????, including Daniel Kuritzkes, the chief of the infectious-diseases division at Brigham and Women’s Hospital, who said, “There’s no evidence that there are strong and weak variations of the coronavirus circulating. There may be minor variations person to person or location to location in the actual genetic sequence, but there is no evidence that they have different virulence or that a less virulent version is overtaking a more virulent version.”

As Chotiner continued to press him on his underlying assumption that COVID-19 would “weaken” over time as he (mis)remembers AIDS, SARS, syphilis, and Ebola doing, Epstein got increasingly flustered and confrontational, insisting that his “skill of cross examination” as a lawyer qualified him to interrogate the evidence and substitute his own judgment for that of experts in the field.

CHOTINER:  You keep talking about your “sense.” I think that’s the word you’re using. But you’re stating as a fact that the virus is going to weaken over time. It seems like we do not know that. We can turn to other viruses and how they’ve—

EPSTEIN:  No, that is not what I said. I said there’s a long-term tendency in these ways. Over time, yes. And is this a hundred-per-cent tendency? No. Is there any known exception to it? No.

And then, when Chotiner politely suggested that it might be irresponsible to publish theories postulating about scientific fact in an age of misinformation where the stakes are life and death, things went totally off the rails.

EPSTEIN :  Admit to it. You’re saying I’m a crackpot.

CHOTINER:  I’m not saying anything of the—

EPSTEIN:  Well, what am I then? I’m an amateur? You’re the great scholar on this?

CHOTINER:  No, no. I’m not a great scholar on this.

EPSTEIN:  Tell me what you think about the quality of the work!

CHOTINER:  O.K. I’m going to tell you. I think the fact that I am not a great scholar on this and I’m able to find these flaws or these holes in what you wrote is a sign that maybe you should’ve thought harder before writing it.

EPSTEIN:  What it shows is that you are a complete intellectual amateur. Period.

CHOTINER:  O.K. Can I ask you one more question?

EPSTEIN:  You just don’t know anything about anything. You’re a journalist. Would you like to compare your résumé to mine?

CHOTINER:  No, actually, I would not.

EPSTEIN:  Then good. Then maybe what you want to do is to say, “Gee, I’m not quite sure that this is right. I’m going to check with somebody else.” But, you want to come at me hard, I am going to come back harder at you. And then if I can’t jam my fingers down your throat, then I am not worth it. But you have basically gone over the line. If you want to ask questions, ask questions. I put forward a model. But a little bit of respect.

Uhhhh … maybe don’t do that? Maybe stick to the practice of law and leave the science to the scientists? But, hey, it’s just a theory.