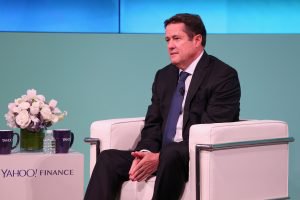 One of the great rhetorical weapons in the activist investor’s arsenal is to blame the target of their ire—a CEO, a board of directors or both—for causing “disruptions.” And not the good kind those Silicon Valley types are always talking about, but the kind that arise when regulators, who have already expressed their mild irritation at transatlantic vigilante campaigns against whistleblowers, decide to dig a little deeper into your ties to a dead pedophile. This can be effective, if really somewhat beside the point, when you are seeking the firing of said disrupter. The problem arises when a pandemic shuts down the global economy, which would make said ousting of said disrupter a disruption in and of itself, and at a very delicate time, to boot, and thus make the activist the bad kind of disrupter that said activist has been railing against.

This, alas, is the situation Edward Bramson finds himself in vis-à-vis Jes Staley and Barclays. And since he can’t exactly fly home to preside over Staley’s beheading by proxy right now, anyway, he’s made like his fellow activists in deciding that discretion is the better part of valor, for now, especially if Barclays at least gets started on what will be a good disruption once this whole miserable nightmare passes.

Barclays Plc’s top shareholder is withholding its vote on Jes Staley’s reappointment next month but stopped short of recommending his ouster to avoid destabilizing the bank during the coronavirus pandemic.

Sherborne Investors Management LP, which previously called for Chief Executive Officer Staley to be removed from the board, also asked fellow investors to pressure the bank to step up succession planning and announce “an orderly” timetable for his replacement….

“There are 80,000 people at Barclays, and we cannot imagine that the board has not already identified one or more of them as viable permanent or interim Chief Executive Officer candidates,” according to a letter from Edward Bramson’s Sherborne Investors on Thursday.

Literally just pick one of any of them and Bramson promises to go back to Connecticut for good.