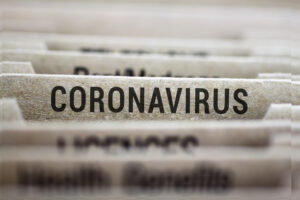 If you’re a legal professional looking for predictions about when courts will ramp back up and legal work return to normal, you’ve still not come to grips with reality.

Courts have largely closed to the public, literally slamming the door on access to justice to millions of citizens.

This is institutional failure. As Jordan Furlong argues in his pandemic and the law series, “Institutions need resilience in a crisis, just like people do. If your institution was forced to shut down because of the pandemic, then it failed its resilience test. It wasn’t there for us when we needed it.”

The hand-wringing and denial in pre-COVID-19’s overburdened, underfunded justice system, has shifted to crisis and triage. Or worse, total standstill.

But is there a silver lining?

“This crisis might not have been the disruption we wanted, but it’s the disruption we needed,” Michigan Supreme Court Chief Justice Bridget McCormack said to more than 450 lawyers, judges, advocates, and others gathered Monday for a Legal Services Corporation briefing on the state of access to justice.

McCormack voiced plainly what many others on the call said was happening in California, Tennessee, Washington, and areas with large legal aid service agencies such as Detroit, New York City, New Orleans, and Miami. Courts are scrambling to adopt technology solutions to get operations back online and to increase services during the pandemic.

McCormack’s comment also signals that there is no going back. Now that courts are seeing how new processes that don’t require a physical court presence can provide access to more people, it’s going to be impossible to justify returning to the status quo ante.

Legal futurist Richard Susskind has long advocated for a shift in thinking with the courts, one he and Furlong predict most certainly is changing during this global crisis: Courts aren’t a place, but a service.

When we think about courts as a service rather than a place, it’s much easier to conceptualize technology-driven or facilitated dispute resolution.

In fact, it’s hard to think about returning to the status quo, with a rigid expectation for physical presence and an overly complex process built serving a place rather than serving justice.

But even Susskind, whose book “Online Courts and the Future of Justice” was presciently released in December, couldn’t have predicted such a rapid shift to technology-facilitated court access.

“Rather than perhaps the decade I was anticipating, in a fortnight we have seen huge numbers of courts around the world shutting, and we have seen correspondingly large numbers of cases being held by video conference and telephone conference too,” Susskind told legal technology expert Bob Ambrogi during a recent interview.

These aren’t seamless proceedings. Nor should they be expected to be. Instead, this is a massive experiment that we can expect will yield enormous data points and anecdotes about what works and what needs adjusting to adequately conduct legal business and uphold the rule of law in a digital environment.

Still, it would be shortsighted and a mistake to think that things will return to “normal.” Things shouldn’t return to normal for the justice system.

Well before the pandemic triggered court closings and the ceasing of jury trials for some indeterminate period, courts were grappling with an access to justice crisis. Courts have long been underfunded and equal access out of reach for the majority of Americans.

What we should expect from our institutions at this point is continued testing while they scramble to bring operations back online.

On Monday’s call, the number one fear for heads of legal aid agencies around the country: funding.

The economic impact will most certainly hit already stretched court systems hard. Agency heads and chief justices indicated they are bracing for what could be an overwhelming number of cases from the neediest populations, especially in areas of housing, employment, medical debt collection, and domestic violence.

“We know that a tidal wave of legal needs is headed our way, and we have to be ready to respond,” said ABA President Judy Perry Martinez, who appointed a national task force to assess and respond to COVID-19-related legal needs.

Callers were assured by Rep. Joe Kennedy III, D-MA, and Rep. Fred Upton, R-MI, that there is an awareness of and bipartisan support for front line legal services for those particularly hit hard by the pandemic.

The only way forward is to find new ways of doing business for the courts.

Molly McDonough is a longtime legal affairs writer and editor. Before launching McDonough Media, she was editor and publisher of the ABA’s flagship magazine, the ABA Journal. She writes about access to justice at A Just Society.