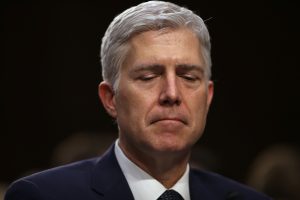 Things got a little, erm, testy during Supreme Court oral arguments on Tuesday. The case is Seila Law v. Consumer Financial Protection Bureau and sparks were flying during an exchange between Supreme Court Justice Neil Gorsuch and Kirkland & Ellis’s Paul Clement. Clement was making his impressive 101st argument in front of the Court, but that doesn’t mean Gorsuch is about to go easy on him.

Gorsuch began the exchange by inquiring how, in terms of presidential removal powers, to distinguish between single-director agencies and cabinet officials and multi-member agencies. When Clement responded, as reported by Law.com, with the best of intentions:

“So I want to be responsive,” but added that he wanted first to point out that “you don’t avoid drawing a line by adopting the solicitor general’s position.”

But that wasn’t really answering the justice’s question. And when given the second chance to answer the question, Clement again drew a comparison between his position and the solicitor general’s. That — which Gorsuch interpreted as “disparaging” — was no bueno:

Gorsuch said he understood, “now if you could answer my question.” Clement gave an answer, but not to Gorsuch’s satisfaction. The justice rephrased the question and Clement answered: “I offer you two limiting principles, which I think is two more than the solicitor general’s offered you. But here’s the first: The first is—”

Gorsuch cut off Clement. “If we could avoid disparaging our colleagues and just answer my question, I would be grateful,” Gorsuch said. Clement then offered two limiting principles and added, “And I didn’t mean to disparage my colleague. I was just saying the  same limiting principle ultimately has to be in  place for multi-member commissions.”

Gorsuch regularly deploys the passive-aggressive zinger of being “grateful” for an answer. That usually means he’s fed up and advocates in front of the Court better hurry up and answer. A sampling of instances of Gorsuch using such a polite sounding word to express his displeasure includes one from an early moment in Gorsuch’s tenure on the bench:

In 2016, while answering one of Gorsuch’s very first questions as a justice, [Jones Day partner Shay Dvoretzky] was interrupted by the justice saying, “I’m sorry for interrupting, counselor. If you would just answer my question, I’d be grateful.”

And it’s a rhetorical crutch he’s kept coming back to:

Last October, in the argument over Puerto Rico’s bankruptcy, Gorsuch engaged with Gibson, Dunn & Crutcher’s Ted Olson during one exchange.

“Mr. Olson, I’m confused. I honestly don’t understand what the difference between your test and the government’s test is in this case. If you could articulate that in a few sentences, I’d be grateful,” Gorsuch said.

Sometimes, Gorsuch helps out a colleague. In the November argument in Maui v. Hawaii Wildlife Fund, Gorsuch asked David Henkin, counsel to the wildlife fund, “But counsel, could you just answer Justice [Samuel] Alito’s question? I’d be grateful if you would.”

So, if you ever find yourself arguing in front of the Supreme Court, watch out for insults disguised in “grateful” clothing.