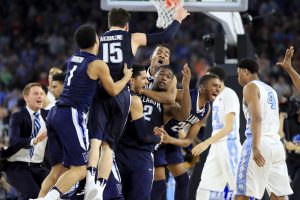 The NCAA claims that it is ready to allow college athletes to begin profiting off of their names, images, and likenesses, but not in a free market. Instead, the NCAA Board of Governors’ thirty-one page Final Report and Recommendations qualifies that the market will need to be created in a manner that is consistent with the collegiate model.

The recommendations will allegedly be turned into legislative proposals by October 31 and be voted on by the NCAA before January 31, 2021 with the intention of making them effective, if passed, before the start of the 2021-22 college sport seasons. While the NCAA would like people to believe that it is finally proposing that college athletes receive the rights they deserve, the recommendations lack specificity, put too much power in the hands of the NCAA and do not go far enough to ensure that college athletes are treated fairly.

The NCAA says that it must have guardrails in place to ensure that any compensation received by college athletes in exchange for the use of their names, images, and likenesses represents a genuine payment for such use as opposed to a disguised form of pay for their participation in sport. In theory, this makes sense. How it is accomplished in practice is of concern, particularly without any explanation of who will make such determinations and how they will be made.

There needs to be objective criteria established to ensure that there is no favoritism toward a particular individual, school, or conference. As of right now, no clarity has been provided as to how this will work, whether the NCAA will create a clearinghouse to review all pending deals and how long the review process will take for each opportunity. If these guardrails will be subjectively applied, then it causes grave concern, as the NCAA is not in a position to determine whether a proposed endorsement is authentic or not and will be inundated with requests for review that it simply does not have the capacity to handle.

Group licensing is currently not recommended by the NCAA, which means that products such as video games would not be available for purchase under the NCAA’s plan. This may come as a shock and grave disappointment to consumers who have been hoping for a return of the extremely successful NCAA Football video game that was a top selling EA Sports title before it was canceled.

The NCAA has claimed that group licensing is “unworkable” in college sports, mainly due to there not being a union or bargaining unit for the players. It is essentially saying that it does not want group licensing because it believes that the door will then be opened for college athletes to classify themselves as employees thereby making them entitled receive wages and benefits and shedding the NCAA’s veil of amateurism.

No one should accept the NCAA’s position that group licensing is unworkable.

Limitation on Shoe and Apparel Companies

The NCAA’s recommendations are not centered on the creation of a free market for college athletes, and that is most clearly evidenced by a portion of the document that recommends certain areas of enhanced regulation. Specifically, the NCAA says that deals between college athletes and shoe/apparel brands should be contingent on rules being developed “to prevent these new activities from undermining the integrity of the collegiate model and the recruiting process.”

Often, the most lucrative deals for athletes come in the form of endorsement deals with these brands. For instance, Zion Williamson signed a seven-year, $75 million deal with Jordan Brand going into his rookie season in the NBA. The value was based almost entirely off of Williamson’s prior performance, projected future accomplishments and social media exposure, which would have also been factors had Williamson been able to structure a shoe/apparel deal while enrolled at Duke University.

To take such a potential significant source of revenue away from college athletes would render the entire NCAA proposal almost worthless. Furthermore, it cannot be reconciled with the schools and coaches that have entered into lucrative deals with those very same companies.

One place the NCAA should not be sticking its neck into is the regulation of athlete agents. The Federal Trade Commission already regulates the profession through the Sports Agent Responsibility and Trust Act and more than forty states have a version of an athlete agent law on the books and are involved in the licensure of agents within their borders. Yet, the NCAA has asked for guardrails that will allow the regulation of agents and advisors, who are necessary to help athletes in procuring and negotiating deals that involve their publicity rights.

Simply put, there is no need for the NCAA to involve itself in this process and it will only serve to cause confusion. If an individual is licensed by a state, then that person should be able to work with the athlete who is performing within that state. Similarly, if an attorney is licensed to practice in said state and is in good standing, then there should be no process by which the NCAA should have control over whether that person can provide services to a college athlete.

The Futile Effort of Engaging Congress

Hopefully the NCAA is not conditioning implementation of the recommendations on action by Congress. Oddly, the NCAA included a section in the memorandum that suggested Congress be immediately engaged to ensure federal preemption over state name, image, and likeness laws, establish an antitrust exemption for the NCAA, and safeguard the nonemployment status of college athletes.

“NCAA doesn’t need anti-trust exemptions,” tweeted U.S. Congressman Mark Walker. “They have spent decades using their lawyers to keep young men and women from receiving basic rights, even as they grew to a $1B-a-year organization. I’m sure those same lawyers can help them navigate this w/o congressional intervention.”

It will surprise nobody that the NCAA has been completely reactionary on the issue of providing college athletes these rights, going from once referring to it as opening Pandora’s Box to now doing whatever it can to avoid states beyond California and Florida from passing legislation to allow college athletes within its borders to commercialize their publicity.

Yet, the State of Florida has already made it clear that the NCAA’s latest recommendations will not deter it from enacting its laws that are effective July 2021.

“The NCAA has blocked students from earning a living like their peers for far too long,” stated Florida Representative Chip LaMarca in response to the NCAA’s recommendations. “When Florida Governor Ron DeSantis signs SB 646, Florida’s collegiate athletes will be liberated from these restrictions. But, every student athlete across the 50 states should be able to earn from their talent. If the third largest state can do it, then so can this collegiate organization. With a global pandemic challenging our economy, now more than ever students must have the flexibility to continue their education and provide for themselves and their families.”