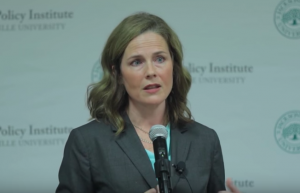 * Hard to Barrett times: Supreme Court justice goes back to alma mater to speak on the tensions between precedent and equity. [NDSMC Observer]

* Virginia just passed a law that will ban open air burning before 4 p.m. to help stave off forest fires.  If a mnemonic helps, say no to Sean Paul till 4! [WDBJ 7]

* The ABA makes it a requirement for law schools to require anti-bias training. Yes, I will be keeping eyes on Twitter for the people outraged over this. Something about enabling equity really gets under people’s skin. [Reuters]

*  Well-behaved women seldom got hired: American Freight Management Company settles hiring discrimination lawsuit for $5M. Does this mean now is a good time to apply or that you wouldn’t want to work here anyway? Let us know! [HR Drive]

* About two thirds of Kentuckians are okay with legal sports betting. May the odds be ever in their favor. [WSN]