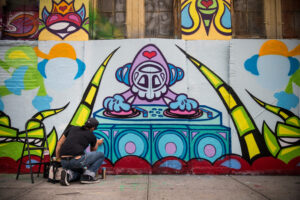 Judge Barrington D. Parker Jr. wrote for the majority in a case that revolved around graffiti and the Visual Artists Rights Act of 1990. The Second Circuit upheld the district court decision awarding a $6.75 million judgment in favor of a graffiti artist whose work was whitewashed over as part of a real estate developer’s attempt to bring (more) high rise apartments to Queens. The court found that the developer “willfully” violated the VARA by whitewashing the 5 Pointz complex in Long Island City, Queens, which had been used since the 1990s as a display space for the works of graffiti artists.

The decision turned around whether or not the art had taken on “recognized stature,” and Judge Parker commented on the fluid nature of that standard, and made an… interesting comparison:

“Since recognized stature is necessarily a fluid concept, we can conceive of circumstances under which, for example, a ‘poor’ work by a highly regarded artist—e.g., anything by Monet—nonetheless merits protection from destruction under VARA,” Parker wrote in the 32-page decision.

A lot of people took that line to be a healthy dose of shade at Claude Monet, the French impressionist master. But Parker insists that wasn’t what he meant at all.

Speaking with New York Law Journal, Parker said the intention was only to demonstrate that even lesser-quality works by greats like Monet would still get “recognized stature.” But rather than try to fight on behalf of his real meaning in the court of public opinion, Parker decided the more prudent course of action was just to remove the reference:

Parker, who professed a great appreciation for the arts, clarified that Monet is an “absolutely great artist,” and said it was best to delete the reference, which was incorrectly seen as a criticism of Monet.

“I love Monet, and I’m very heartbroken that I was misunderstood,” he said. “It was easier to just change it.”

The amended opinion has indeed removed the Monet reference.