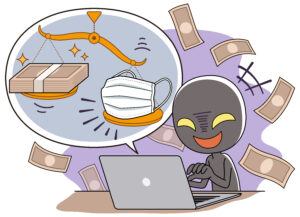 There’s just something about a global pandemic that just inspires (some) folks to try and make an extra buck.

Ang Chong Yi is an associate in the Singapore office of Milbank. He is also one of the lawyers behind the, now defunct, website lawmentors.sg, and it’s this second thing that’s gotten him into some hot water.

Lawmentors was designed as a pay-to-play “mentor network” that claimed to have contacts at Biglaw firms in the United States and the U.K. and charged mentees between one-and-a-half to two months salary for the privilege of their expertise. The website promised “hands-on coaching and practice” to allow members to “outshine all fellow practice trainees and secure a training contract.”

All of which was supposed to help these wannabe lawyers deal with the economic upheaval surrounding COVID-19, which Lawmentors described as “a brutal fight for career survival.” The website went on say that, due to the novel coronavirus, legal “work has largely dried up.” They estimated 700 new graduates would be in competition for between 150 and 200 new jobs due to hiring freezes and other austerity measures, saying the pandemic will lead to a “shrinking legal market” and that two out of three law graduates will “never get the opportunity to practice as lawyers.”

But the Singapore Law Society is investigating the website and called its claims “speculative” and “unsubstantiated.” According to the Business Times, LawSoc president Gregory Vijayendran had this to say about Lawmentors:

We strongly caution parents and law graduates to be discerning about hungry wolves in sheep’s clothing who seek to prey financially on the vulnerability of law graduates. Such opportunistic operators and disservice providers will face the wrath of the Council of the Law Society and the Society’s right thinking members.

That’s… not mincing words. And National University of Singapore’s law dean Simon Chesterman said, “Fearmongering of this sort during a public health crisis is irresponsible and misleading.”

In response to the uproar over the website Ang said, “I meant it for interest gauging, but took it down after people said it was not right to take money from students who are just starting to look for jobs. No formal programme was started, no money was taken from them.”

Well, I guess there’s something to be said for the effectiveness of good, old-fashioned outrage.