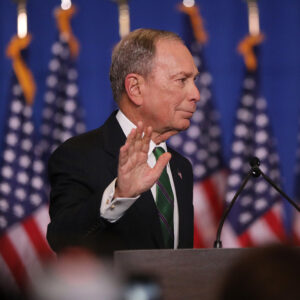 Mike Bloomberg’s $900M+ presidential campaign never made much sense. The only merit to the entire endeavor was allowing Elizabeth Warren to drop anvils on him for two hours like the luxury brand Elmer Fudd he is. From the beginning, the whole campaign felt like a cruel trick played by opportunistic consultants separating a fool from his money with laser precision. Remember in 2016 when his people leaked these preposterous maps they were teasing him with — showing him in prime position to win a three-way race? Good times.

Now he’s out, but not before giving the Democratic Party one last look at his dyed-in-the-wool liberal bona fides: he told his staff they all probably have coronavirus and then fired them and took them off their health care.

Anyone hear the slogan, “Mike Will Get It Done“? Well, his staffers are pretty sure the “it” was “screwing them over.” By the way, I lived in this city for 12 years and never once heard that phrase but this chump ran his campaign like that was his political calling card for decades. Where did that even come from and why wasn’t it “Tippecanoe and Terminals too” or “The Cross of Big Gulps”?

Alas, before that whole “firing coronavirus patients” maneuver wends its way to the courthouse, Mayor Mike has a class-action suit waiting for him in the Southern District of New York. Shavitz Law Group and Outten & Golden filed a putative class action on behalf of exempt-classified Campaign Field Organizers for Bloomberg’s beautiful, doomed quest seeking unpaid overtime pursuant to FLSA as well as fraudulent inducement and breach of contract after allegedly promising continued employment through November 2020 — whether or not he won the nomination.

The latter claim stems from Bloomberg’s decision to enter the race late and allegedly promising the moon to any seasoned hand willing to bolt on their existing job to help him out. The complaint says the promise to pay through the end of the cycle was the carrot held out to get staffers to commit to the team. Needless to say, after Democrats kicked him to the curb, Bloomberg is not paying staffers through November.

It’s hard to feel bad for the high-ranking folks grifting off Bloomberg’s ego. They goaded him into the race with patently ridiculous lies about his viability and cashed huge checks for their time and effort. But the rank-and-file workers didn’t slide right back to their K Street consultancies. These are folks who do the dirty work of waging a campaign. They’re people who gave up other opportunities for this. People like to think of campaign workers as idealistic true believers but at a certain level of the campaign, it’s more of an organizational project management gig rather than a holy crusade. These folks deserve to get paid because they’re highly skilled professionals.

And to borrow from Animal House, their only error was in trusting Mike.

(Check out the complaint on the next page.)