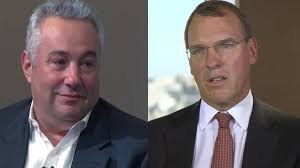 So Goldman Sachs is about to pay a hair under $2 billion and have some unimportant Asian subsidiary plead guilty to helping bilk Malaysia out of $6.5 billion, to get the Justice Department to shut up about the whole thing. Talks with the Malaysians are not going quite as well, what with their seeing $2 billion as a starting point for talks about the interest Goldman should have to pay, before getting into the meat of the matter.

“There is still a Pacific Ocean gulf between Malaysia and Goldman Sachs,” he said. “But as far as we’re concerned, the door to settlement is always open. They know where we are, they can come and see us if they want to find us….”

Malaysia will seek compensation from Goldman Sachs that includes the $6.5 billion value of bonds the bank arranged for 1MDB, as well as interest. That totals $8 billion to $9 billion, he said.

And if they don’t want to find them? Well, Attorney General Tommy Thomas will be happy to find those 17 current and former Goldman executives accommodations in a Malaysian prison.

Malaysia will press ahead with the prosecution of more than a dozen current and former Goldman Sachs directors “because we need them in the dock,” Attorney General Tommy Thomas said in a Friday interview. “The 17 directors committed crime in Malaysia, which is why they are being charged, so there is no reason why we are not going against them….”

Thomas said he’s focused on preparing to prosecute Goldman’s units and directors in a trial which he expects to start in the middle of next year….

“We prepare for the trial, and if there is settlement talks, we can do it simultaneously,” Thomas said in the interview at his office in Malaysia’s administrative capital of Putrajaya.

You know, just to see if a criminal prosecution sharpens the mind a bit. Door’s open, D-Sol.