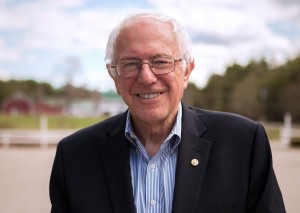 ‘I’m once again asking you not to get distracted by gunners on Twitter.’

Bernie Sanders says a lot of stuff out there on the campaign trail to fire up his supporters.

At a recent event in Los Angeles, he hit on an issue that’s a high priority for both civil libertarians and criminal justice reform advocates alike: marijuana legalization. 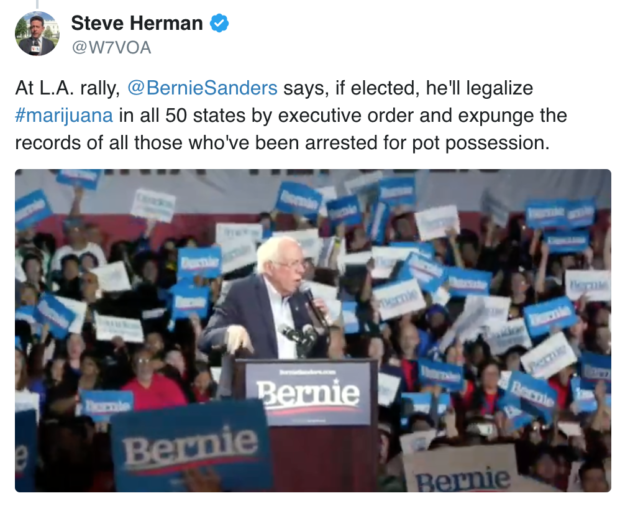 The reaction from the more sanctimonious sectors of Legal Twitter started ripping Sanders for not understanding legal basics. There were a lot of cracks about how executive authority works and administrative law and even federalism. What most of these folks missed though was that Sanders is… mostly right about all of this.

While it may pain lawyers and quasi-lawyers, the first step to untangling the Sanders position is getting past semantics. Can a president legalize drugs by “Executive Order”? Not really. Can a president, through his or her executive authority, order this to happen? Yeah, pretty much. Once you’re not hung up on the Executive Order term of art this isn’t particularly controversial. The Controlled Substances Act defers authority to the Executive Branch to determine where specific drugs are scheduled and, by extension, just how much of a federal crime you’re committing when you’re using.

Specifically, the law defers authority to the Attorney General to “remove a drug or other substance entirely from the schedules.” That said, wholesale removal would trigger an international law wrinkle. There are a number of international conventions that place the United States under an obligation to keep marijuana controlled. Now, the Trump administration tried to pull the U.S. out of the Universal Postal Union — the treaty that controls international mail standards! So it’s not like the precedent isn’t set to walk out on those obligations.

But, for the sake of argument, let’s say Sanders wasn’t interested in continuing the White House’s blanket disregard for international law. As it turns out, the Controlled Substances Act also accounts for this, noting that “if control is required by United States obligations under international treaties, conventions, or protocols in effect on October 27, 1970, the Attorney General shall issue an order controlling such drug under the schedule he deems most appropriate.” So we’ve run aground on the rocky shores of semantics again. Sanders is likely hamstrung from “legalizing” marijuana by removing it as a controlled substance. However, turning pot into the equivalent of cough suppressants? Very within his power and something the rest of the country would commonly understand as “legalization.”

An administrative rescheduling is a time-consuming process, but ultimately a pretty straightforward one. Sanders critics on social media kept pointing to a Brookings article for the proposition that rescheduling drugs is so onerous as to be nearly impossible. Actually reading the article though, it’s woefully misplaced in the context of the Sanders argument. It provides a compelling explanation for why the Obama administration would be unlikely to reschedule marijuana which is fascinating yet irrelevant to the question of whether or not a Sanders administration could do so. Sure there are inter-agency studies to do and all the usual trappings of rulemaking to clear administrative law hurdles, but that’s not a prohibitive bar.

At one point, the authors note that a big problem crossing the Ts on the rule-making process would be:

These choices are ultimately made by presidential appointees and others sensitive to political considerations. The politics surrounding administrative rescheduling are unfavorable. It is not a policy priority of the Obama administration.

The Sanders appointees serving in a hypothetical administration where he won on this platform would probably sing a different tune. This doesn’t provide any inherent barrier to Sanders administration action.

Some critics zeroed in on the “massive” federalism problem of the federal government functionally overruling state criminal laws against marijuana. It is certainly a problem and likely one that the presently constituted judiciary would make insurmountable, but it’s unfair to call it massive. Indeed, if the federal courts cared about “precedent,” this imaginary Sanders administration would have a pretty good argument, especially if we assume marijuana isn’t “uncontrolled” but rather “reclassified.” The FDA and the states have a long-running battle over who rules the roost when it comes to federal preemption.

Recently, states have started cracking down on opioids. And while states have gotten away with tightening pharmacy restrictions and the like, efforts to outright ban pharmaceuticals have run smack into the FDA claiming “we approved it, so you can’t ban it.” It’s hard to see how the Sanders administration fight with the states over this wouldn’t track the facts of these these opioid cases.

But, yeah, he can’t unilaterally make states expunge state criminal records. So there he was totally wrong. So yeah, let’s throw the whole thing out.