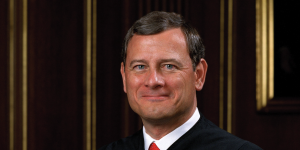 If you’re like most Americans, you’re probably not watching the impeachment trial going on in the United States Senate. Hell, most of the Republican Senators have stopped watching it. I encourage anyone on jury duty to try to just leave the trial whenever they feel like it. This is all happening with the blessing of John Roberts who proved himself the consummate appellate judge by displaying the trial management skills of a Teddy Ruxpin running on 20-year-old batteries. But at least he wants everyone to be nice!

While the Senate hears a rundown of stuff we all learned from the original impeachment hearings before issuing a party-line acquittal, it might seem as though there’s not much to see in the impeachment coverage. But for attorneys there’s a lot on the line, specifically the opportunity to be insufferable pedants about the media’s insistence on screwing up a 150-year old title.

The most stunning thing for me… a lawyer does not stand in front of the Chief Justice of the Supreme Court and lie.

She’s not alone. Variations on this have come up a lot over the last few days and it provides all of us with law degrees that precious opportunity to miss the substantive point entirely and proclaim to the world how we are technically correct which, of course, is the best kind of correct.

There. Feels better to get that off our chests, doesn’t it lawyers? Now we can go back to watching bits of the trial between commercials.

McCaskill: Trump’s lawyer just stood in front of the Chief Justice of the Supreme Court and lied [MSNBC]
Trump’s Defenders Could at Least Pretend to Care About the Charges Against Him [Esquire]