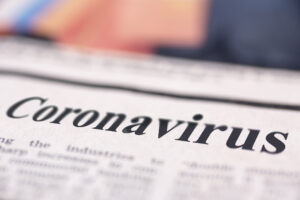 Law students are facing a new and precarious danger: Coronavirus has not only quieted streets and shut down restaurants, it has thrust the economy into a deep recession, perhaps even depression. During the chaos and disquieting calm since we all retreated into quarantines, law students and law professors are faced with the situation of trying to carry on as normal to finish the semester, all the while knowing it isn’t normal at all.

Some schools have recognized the new normal, allowing students to finish pass/fail. Some have opted for an ignorance is bliss approach, preferring to continue with grades as if the world of law students hasn’t changed. Others, in a particularly callous effort, have requested that students write essays justifying pass/fail, as if COVID-19 were not justification enough.

The pandemic lifted the veil between law school and “the real world.” Sitting alone in my room (now workspace, gym, dining hall — oh, and sleeping space) it feels impossible to pull it back and focus only on law school.

Suddenly, class, grades, and rank feel less important — I’m not certain what the world will look and who will be there after the pandemic passes. Then again, even getting a job after law school seems unlikely. Let’s not forget that there’s also a recession. Law students from lower-ranked state schools cannot compete with the top-tier law schools whose graduates will be scrambling for anything they can find this and next year.

Enter the Great 2020 Law School Debate: Should law schools use pass/fail or keep the curve? The debate exposed a tension: pass/fail is the fairer option given the suddenness of the change, but some law schools prefer to use the curve to distinguish their “best” students and give some students a boost in hiring and a tool to dole out scholarships. Some law schools offered another choice: You can see your grades, and if you don’t like them, declare pass/fail. Already, law schools recognized that its method favors a certain type of (white, wealthy, and legal pedigree) student — usually dismissing the concern with the “but everyone knows how to do law school by the second semester.”

But the threat of the curve forced law students, who are taught to put their heads down and do their best, to start speaking up about their unique, and increasingly difficult, if not impossible, situations. Law students are not the same as they were thirty years ago. Nor twenty years ago. The demographics have changed.

During the semester, law students carefully plan their entire semester around attending in-person classes. Within one week, a virus upended these plans and students in the most perilous financial and family positions are now most at risk of being unable to finish the semester.

Not all students have reliable access to food. Yes, free pizza lunches were an important part of my food budget. The presumption that we have equal access to food is wrong.

While many law students are older and have children, not all of them have access to childcare. Suddenly, law students also must double as parents for more hours of the day. Twenty years ago, women made up less than half of law students. Today, women are the majority of law students. Women are burdened with more responsibilities at home. The presumption that we all have equal study time is wrong.

Not all of us have access to quiet study areas — I write as my neighbors have decided weeknights are now for parties and revving large trucks.

Not all students are financially secure. We lost clerkships, internships, jobs, and more in this pandemic. One day, we had a job that paid for groceries, utilities, and books. The next day, we were told to stay home. Some of us work part-time and do not qualify for unemployment in most states. Many of us do not have families that can support us. Being in a risky financial situation is not only anxiety-inducing, but a real crisis that predominates many of our lives. The presumption that this pandemic was anything other than life-altering is wrong.

Many first-generation college students are now primary-income earners. Nearly 20 percent of the workforce reported being fired, laid off, or on reduced hours last week. Stories within first-generation circles abound with the reality that our parents are now unemployed with no help — some are undocumented immigrants who will not be bailed out. Some students have already decided to quit and return home. Some may have no choice within a few weeks.

Many students will get sick or have sick family members they must care for. That is the reality of a pandemic: people get sick. Enforcing the curve asks law students to prioritize being a law student over caring for a sick child, parents, grandparents (who hospitals may be forced to simply not treat), or spouses. Medical workers were advised to make preparation in case they died from the virus. Law students and their spouses may be making end-of-life plans now — just in case.

If law schools ever cared for their students’ physical and mental health, they must consider all students and the unique positions they endure, not just the caricature to which many cling.

As debates around the meaning of coronavirus for law schools fomented, suddenly stock markets dropped — faster than during the Great Depression. We are likely entering a recession, and law students are acutely aware that none of us are getting the jobs that were there when we decided to go to law school. The presumption that things will get back to “normal” is wrong, and we know it.

Most of us remember the 2008 recession. Some of our summer vacations as children were spent riding in unreliable, hot cars to and from unemployment offices with our parents. We are a generation that knows what is like to live in a recession. We know what’s out there for us.

Perhaps prioritizing kindness will do more for law students right now than enforcing law school norms. As law schools scramble to create fair solutions, they must consider their diverse, and struggling, students. To promote normalcy in these extraordinary times will only reinforce inequalities.

K.G. Molina is a law student, the EIC for the ABA Law Student Division, and talks about law school a lot. Please follow on Twitter (@CanPanicNow) for amusing and insightful commentary. Email questions or comments to kgmolina@ou.edu.

LawProfBlawg is an anonymous professor at a top 100 law school. You can see more of his musings here. He is way funnier on social media, he claims. Please follow him on Twitter (@lawprofblawg) or Facebook. Email him at lawprofblawg@gmail.com. The overwhelming majority of this insightful blog post is K.G. Molina’s, which should spontaneously cause you to offer her gainful employment. Anything you hate is my idea. But I’m still right.